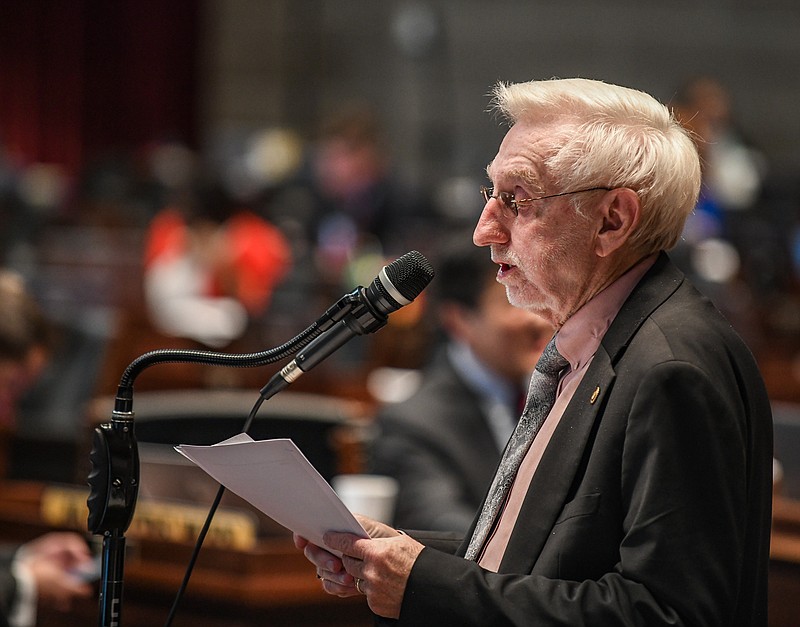 Rep. Rudy Viet is shown Tuesday, April 12, 2022, on the floor of the Missouri House addressing the Speaker of the House. (Julie Smith/News Tribune)

After a frustrating session last year, Mid-Missouri lawmakers are ready to hit the ground running in 2023.

Lawmakers said the effort to get legislation through last year's session was a slog, largely because of division in the Senate, where filibusters loomed over the chamber. But the House wasn't immune to tension, according to Rep. Rudy Veit, R-Wardsville.

"Last year may have taught us a lesson," Veit said. "Everybody has to make an extra effort to have a little more tolerance to get things done -- to work together."

He compared working in the Legislature to his experience growing up with eight brothers and sisters -- his colleagues have to do what it takes to get along.

Most won't make it across the finish line to become law, but lawmakers in Central Missouri are hopeful theirs will be among the few that do.

"I'm optimistic that the Senate can function and function well this year under the leadership of Caleb Rowden and Cindy O'Laughlin," he told the News Tribune. "We must function well. Missourians are demanding we step up and get things done."

In the other chamber, Rep. Willard Haley, R-Eldon, said he, too, is optimistic about the upcoming session.

"As we begin this legislative session, the atmosphere seems to be very optimistic. I feel like everyone wants to get more accomplished than we have during recent sessions," Haley said. "We left too many items of legislation on the table last session."

The Conservative Caucuses in both the House and Senate brought lawmaking to a standstill last year, according to Rep. Dave Griffith, R-Jefferson City.

"... And it is my hope there will be more of a spirit of cooperation to move important legislation that is important to all citizens in the state," Griffith said.

Sen. Mike Bernskoetter, a Jefferson City Republican entering his second term in the state Senate, said he's anticipating state spending to decrease this session. Last year's record-setting $49 billion budget was cushioned by federal funding, he said, but most of that is spent.

"I would imagine it probably won't be quite as high as it was last year because of all the federal dollars, but it's still going to be a significant number because the cost of everything just raises all the taxes that the state receives," he said.

In addition to state employees, Bernskoetter said his budget requests this year are focused on state assets, such as the Capitol. He wants additional funding to be designated for improvements to the interior of the building.

The Capitol Commission Master Plan, which lays out large-scale changes to the Capitol, is underfunded by roughly $200 million.

"Hopefully we can get some more money into the budget to make sure that the People's House is protected for years and years to come," Bernskoetter said, adding that prices have likely increased with inflation.

Bernskoetter said addressing staffing crises faced by state agencies is among the top of his priorities.

The Missouri Department of Transportation is down 1,000 snow plow drivers statewide this winter season. Other state agencies, such as the Department of Corrections and Department of Social Services, have voiced similar challenges keeping staff.

Lawmakers sought to help agencies attract and retain employees last session with a $15 minimum wage and 5.5 percent cost of living adjustment for all state employees, as well as some extra funds to address wage compression resulting from the new baseline. The recommendation came from Gov. Mike Parson and was one of the first items the Legislature approved last year.

Bernskoetter said the raise wasn't enough to keep up with inflation so he plans to advocate for more this year, adding the measure could be a difficult ask to push through both chambers.

"I think it's appropriate that we continue to try to find ways to improve their pay," he said.

"In order for Missouri to remain competitive, we're going to have to look at ways of trying to help people in those kinds of positions," he continued, adding in jobs like teachers and daycare workers. "Obviously we need people to do those kinds of jobs."

Bernskoetter and Griffith have pre-filed legislation to give state employees the option to be paid every two weeks as opposed to set dates each month, which would add two more days to state employees' pay schedule.

The same measure was introduced and passed last year but Parson vetoed it.

Republicans are taking aim at the state's initiative petition process and Bernskoetter said he's on board.

Initiative petitions allow Missourians to modify the state constitution and enact laws through a vote of the people. Sponsors are required to gather a specified number of voter signatures from most congressional districts to have their question placed on the ballot.

Legislators have pre-filed approximately 13 bills that alter the process, most of which seek to raise the threshold for putting something on the ballot or the percentage by which the measure would be approved.

"There's been a lot of talk about initiative petition reform and seeing what we can do so it's not so easy to put stuff on the ballot or not so easy to change the constitution," Bernskoetter said.

Haley and Griffith each agreed lawmakers would again this session take up initiative petition reform.

"It's a top priority for both the House and the Senate," Griffith said.

"It's too easy for interest groups (many of which are from out of state) to get a petition circulated around Missouri to place something on our ballot, which ultimately will change our constitution," Haley offered.

Reinstating the presidential primary, taken away by a sweeping election law last year, is another priority among some House Republicans, including Veit. Others in the Legislature are more focused on creating closed primary elections, which require voters to declare a party affiliation before voting in that primary.

Veit has left no questions about how he feels about a change made to presidential primaries at the close of last year's Legislature. The elimination of the primary was attached to a bill the Senate moved to the House on the last day of the session. Then, the Senate shut down.

"We tell people we want them to vote, then in the next breath we tell them we don't need a presidential election because it doesn't matter," Veit said. "It doesn't make sense."

Haley said he'd like to see the Legislature find solutions to the violent crime problems that have plagued Missouri's larger cities.

"Those who commit crimes need to be held accountable and punished for those crimes, he said. And, he added, "The releasing of criminals who commit violent acts or thefts over and over needs to stop."

Additional topics of conversation among the Republican caucus have been foreign ownership of Missouri farmland and gaming and gambling issues, Bernskoetter said.

"We've been talking about gambling for as long as I can remember," he said. "I'm sure there will be some more discussion about the gaming issues and how we can get sportsbook in Missouri. A lot of states have sportsbook now but we don't so we'll see if we can come up with some compromise that works."

Haley said he hopes to cap rate increases for long-term care insurance policies. He again filed legislation to allow flexibility for cosmetologists to offer mobile services. And, he wishes to name a section of U.S. Highway 50 in Moniteau County after Sgt. James L. Shipley, a Tuskegee Airman from Tipton.

Fitzwater said the primary goals for his first session in the Missouri Senate are to "protect kids and our communities" because "that's on the top of everyone's mind." He said the state needs to grow its economy, prepare for a potential recession in the future and shield itself from federal overreach.

He's pre-filed legislation to provide tax exemptions on certain property used by childcare providers and a bill that would lend state support to fledgling businesses. Additional legislation he's sponsoring would authorize electricity providers to use existing infrastructure for broadband development and allow counselors licensed in Missouri to practice in other states that adopt a compact.

Griffith continues to champion veterans and their issues. He said he has built his relationships with House and Senate leaders, and hopes that will help him get legislation across the finish line.

Veit pre-filed a number of bills, primarily dealing with operations of state government, he said. He has bills that address rules relating to remediation -- for things like court costs and litigation costs. Legislation he's sponsoring deal with Limited Liability Companies and their dissolutions, juror pay, and even allowing chiropractors to treat animals without supervision of veterinarians. In Missouri, he said a chiropractor can go to another state and treat an animal, but must have a veterinarian alongside if doing so in-state.

A priority this year for Veit is changing the age in which a state employee may retire. The age (90) is determined by adding the employee's age with the years of service, so if someone is 65 and has 25 years of service, they may collect full retirement. The total had been 80 in the past. He has a bill that would return it to 80, but said he could see a compromise possible at 85.

"My bills have a better chance of getting through this year because: One, I have more seniority," Veit said. "Two, is we have a leadership that is very focused. They want to get these bills through also. They don't want to be stuck the whole year on ... worrying about ideology."

Fitzwater said he hopes to be named to the Senate's utilities and appropriations committees, as well as other policy-driven committees so his constituents can "have a strong say in the legislative process going forward."

Following the first day Wednesday, the House will have technical sessions starting at 10 a.m. Thursday and Friday. The Senate has not posted its session calendar yet.

The Legislature is out Jan. 16 to observe Martin Luther King Jr. Day. It returns to the Capitol on Jan. 17 for session and the following day for the governor's State of the State Address, which is scheduled for 2:45 p.m. Jan. 18.

Legislators will take spring break March 13-17 and adjourn for the year May 12.