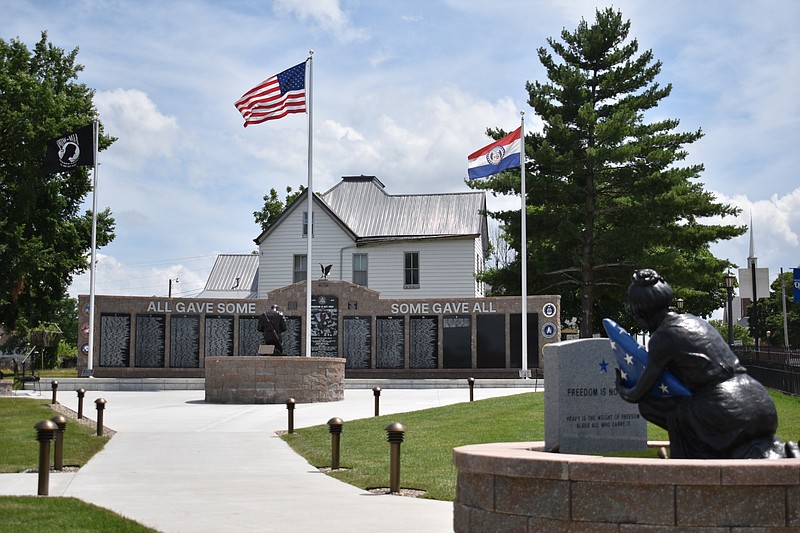 Democrat photo/Garrett Fuller — FILE — The Moniteau County Veterans Memorial inside the Latham Memorial Family Park is seen in July 2022 at the corner of North Oak and East South streets. California Progress Inc., is in the process of paying the remaining balance on the revolving loan used to construct the park, along with finalizing the process of forming a separate nonprofit entity for the park. Following its dedication May 30, 2022, CPI deeded the park to the City of California.

California Progress Inc., board members looked to the future as they considered their upcoming needs.

The discussion, held Monday night at the Moniteau County Library at Wood Place, came as members continued discussion on submitting a request for gifts from a local endowment. Board members also welcomed a familiar face back, rescheduled future meetings and discussed concerns surrounding the newly-independent Latham Memorial Family Park nonprofit.

Sara Holtsclaw returned to the board after having been active in the community for years, she said. Holtsclaw served on CPI "a couple different times," she said, including during the beginning stages of the Latham Memorial Family Park project. She served as the administrator of the Finke Theatre for four years. Holtsclaw will be returning to CPI as its treasurer, replacing outgoing member Jeannie Marsh.

The E.M. Burger Foundation, a local endowment that has gifted money for community projects and area nonprofits, is asking for gift requests. But, CPI has no strategic goals at the moment, according to Executive Director Susan Hodges, yet has identified some other needs.

Another member suggested tabling the topic for the February meeting. However, the deadline for E.M. Burger Foundation request submissions is Sunday.

Holtsclaw warned the lack of strategic goals and projects can have an adverse effect on fundraising.

"From 2009 (until the Latham Memorial Family Park was established); honestly, this board took a break. There was the murals, but that was how many thousand dollars a year?" Holtsclaw asked. "... we took a break, and the community said, 'CPI's taking a break, so why do we need to give them money? They're not doing anything. The murals are great, but they only need $10,000 over the course of how long?'"

Hodges said she'd ask for the remaining balance on the organization's revolving loan for the Latham Memorial Family Park, approximately $18,000, and other needs.

Marsh, the outgoing treasurer, said Evers & Co would be unable to produce the reports in time for the second Monday of each month. This presented the board with some options: They could work with reports two months behind, move the meetings later in the month, or continue doing the reports internally.

The board decided on the second option, voting to move meetings to the third Monday of each month.

Concerns regarding the newly-independent Latham Memorial Family Park nonprofit were also voiced at the meeting. Holtsclaw said the park's treasurer couldn't accept donations at the moment due to the nonprofit not having a bank account and the nonprofit paperwork still needing to be filed.

Mike Robertson, a CPI board member, reported in the December meeting that Ann Perry, a local attorney, helped file the 501(c)(3) paperwork required to create the nonprofit. Robertson said he met with Perry multiple times throughout the process.

He said the park board still needs to meet to discuss completing the process.

CPI may provide the park board with seed money to help it get started on its own. However, such a donation is being tabled as CPI works through potential conflicts with the process regarding its bylaws, which state it cannot donate to other 501(c)(3) organizations.

Board members were also reminded of an upcoming CPI event on tap for next month. CPI will host a meet-and-greet from 5-7 p.m. Feb. 10 at Oak Street Hall, 318 S. Oak St. While the event was initially planned for members and donors, the organization has decided to open it to the general public. Snacks and refreshments will be provided.