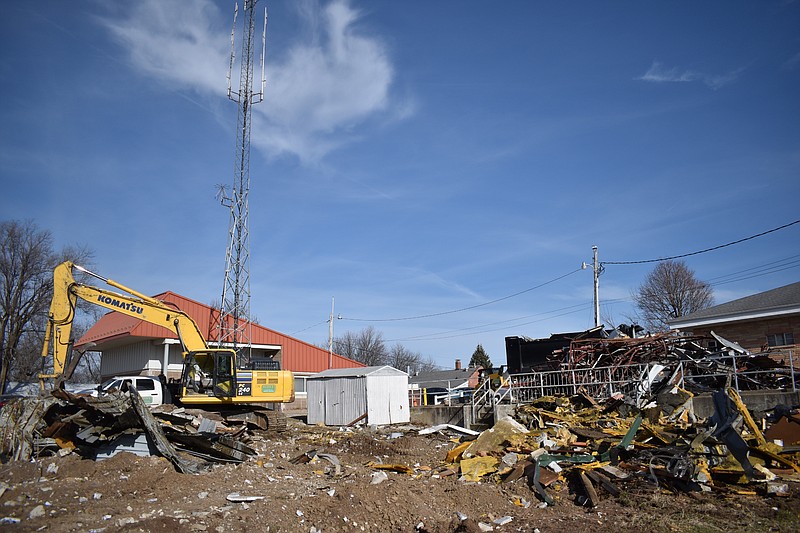 Democrat photo/Garrett Fuller — Piles of debris are all that's left Monday (Jan. 9, 2023,) of the former Moniteau County Jail at North Oak and East North streets. The facility, which was replaced by the current jail in 2013 and later vacated by the Moniteau County Sheriff's Office in 2018, was leveled to make room for a possible addition to the Moniteau County Emergency Dispatch facility, located in the background on the left.

Nearly a decade after it closed, the old Moniteau County Jail finally came down.

Haile Excavating Inc., crews started dismantling the former jail Friday, reducing the building to a pile of rubble in less than a day. The old facility, used as the county jail from its opening in 1981 until 2013, was leveled to make way for a potential future expansion project by neighboring Moniteau County Emergency Dispatch (MCED).

Tony Haile, owner of Haile Excavating, said Monday there were no unforeseen issues with the demolition.

Kevin Wieberg, MCED director, said the process began Dec. 12 when dispatch purchased the property from the county government for its appraised value of $34,592. However, the demolition bid for Haile Excavating was $9,700.

"The jail, it had a lot of issues with mold, black mold, in the building. It was coming through the walls of the old sheriff's office and they tried to ... remediate the mold a couple times but failed," Wheatley said. "There wasn't enough room there for an office. It only had two offices in that whole jail, the rest of it was all rooms for inmates. It wasn't near big enough for what we needed, and with the mold and the issue they had with the building continuing to seep water and stuff like that, it wasn't safe to keep people in there."

With growing staff, responsibilities and need for additional space, Wieberg said MCED has nearly outgrown its current facility at 604 N. Oak St., which was constructed in 1997.

"We're in need of more office space, a larger call center and even our equipment itself has (grown) also, there's more equipment than there was whenever the building was first constructed as well," he said. "That and just to meet the needs of what we're wanting to accomplish, we're needing to expand and that kind of led us to, since the building next door was vacant, we looked at purchasing that from the county, which we have."

Wieberg said there was "no feasible way" to remodel the old jail, as it was constructed with concrete blocks and jail cells.

Emergency dispatch had no options, but to demolish the structure and begin looking at building an addition to meet its future needs, he said.

In addition to more space for offices, equipment and a larger call center, Wieberg also said there's a need for meeting space -- which can become vital when an emergency strikes.

"There's a lot of organizations that will utilize our conference room and it's just not sufficient. Even our board meetings are crowded just with our ... seven-member board, and it's snug in there every meeting that we have," he said. "But we're also looking at if there's a large disaster in the county. Like, for instance, if a tornado were to come through the county, we would need a lot of space to work and function (as) an emergency operations center with our other partner agency heads to help resolve a lot of the issues that occur during (emergencies). Right now there's just not a feasible space for that."

Wieberg doesn't have a timeline for the project, but said MCED has been saving for building an addition.

"I would venture to say that we're going to begin the planning process this year," he said. "As far as what that looks like in the future, I'm not sure if 2023 would be the year that we break ground in the addition. It's just too early to tell at this point."

The demolished jail was constructed in 1980-81 after an Oct. 7, 1979, blaze at California Construction Supplies heavily damaged or destroyed many buildings within the same block, including the original jail. Voters passed a $175,000 general obligation bond Dec. 18, 1979, to construct the facility, which opened May 24, 1981, with a ribbon cutting. 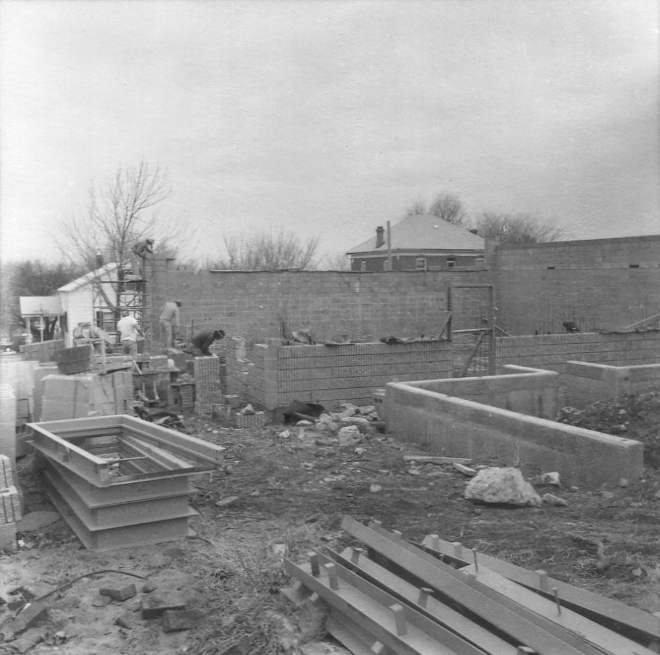 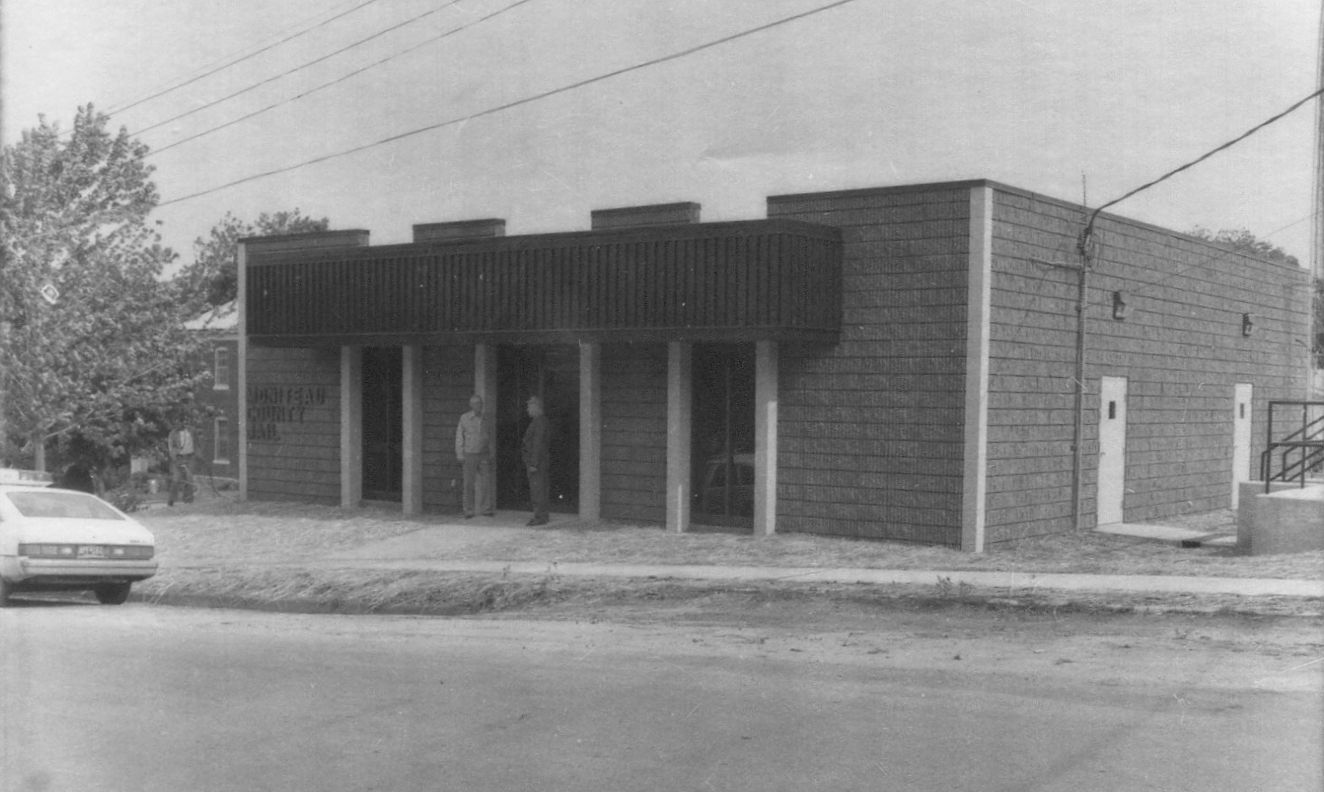 California Democrat FILE — The former Moniteau County Jail is seen in May 1981 following its completion. The jail was constructed on the site of the original jail, which was destroyed in a October 1979 blaze. The building continued to serve as a jail until 2012, when it was replaced by a larger facility at East North and North East streets. The Moniteau County Sheriff's Office continued to use the building until 2018, when it was finally vacated. The former jail, located at North Oak and East North streets, has been demolished to make room for a potential addition to the neighboring Moniteau County Emergency Dispatch offices. 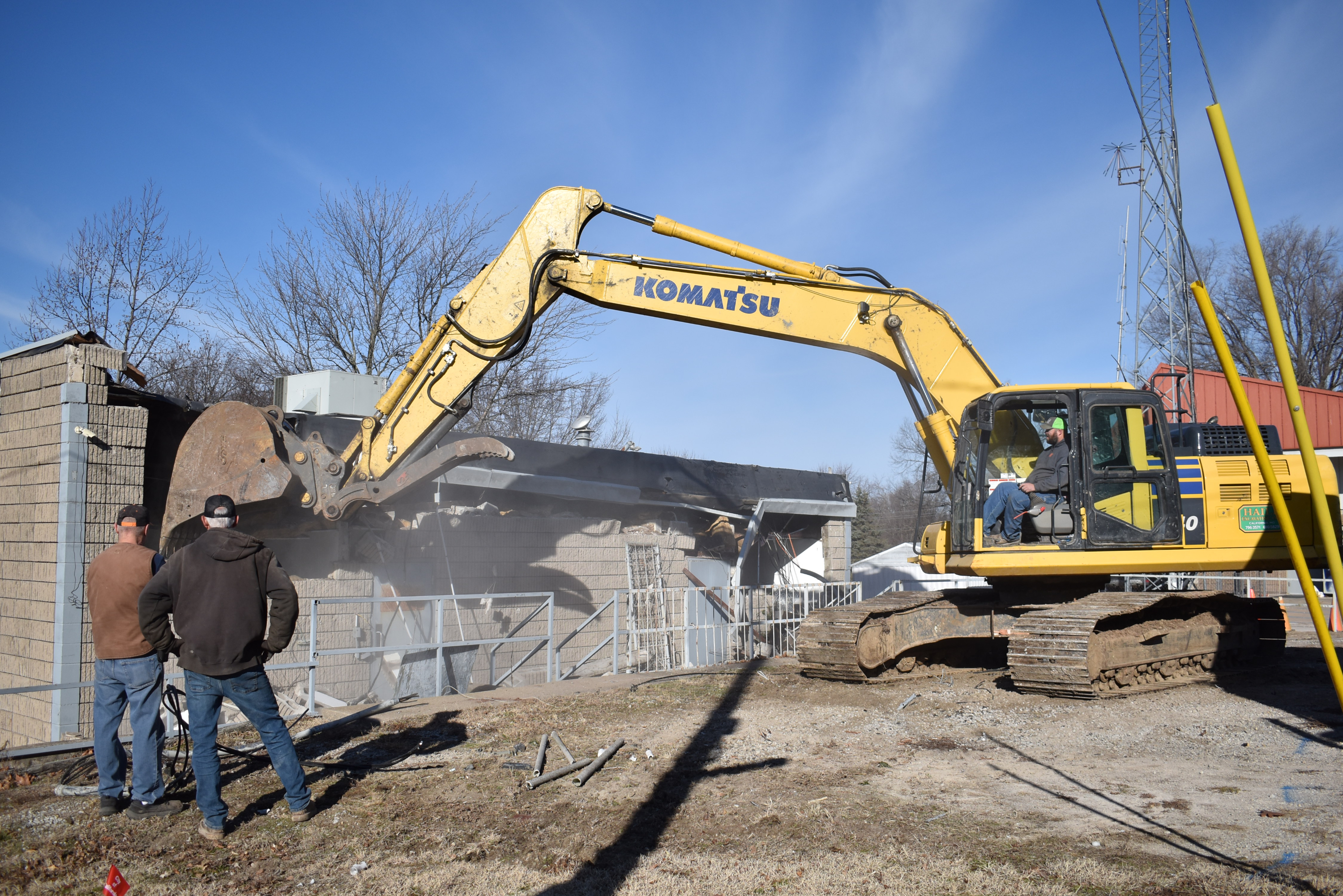 Democrat photo/Garrett Fuller — Charlie Reynolds, left, and Lanny Ash watch Friday (Jan. 6, 2023,) as Tony Haile, excavator operator and owner of Haile Excavation Inc., tears into the former Moniteau County Jail. The facility, located on the northeastern corner of North Oak and East North streets, has been vacant since 2018, when the Moniteau County Sheriff's Office moved to its current location. Previously, the jail function moved to the current facility in 2013. 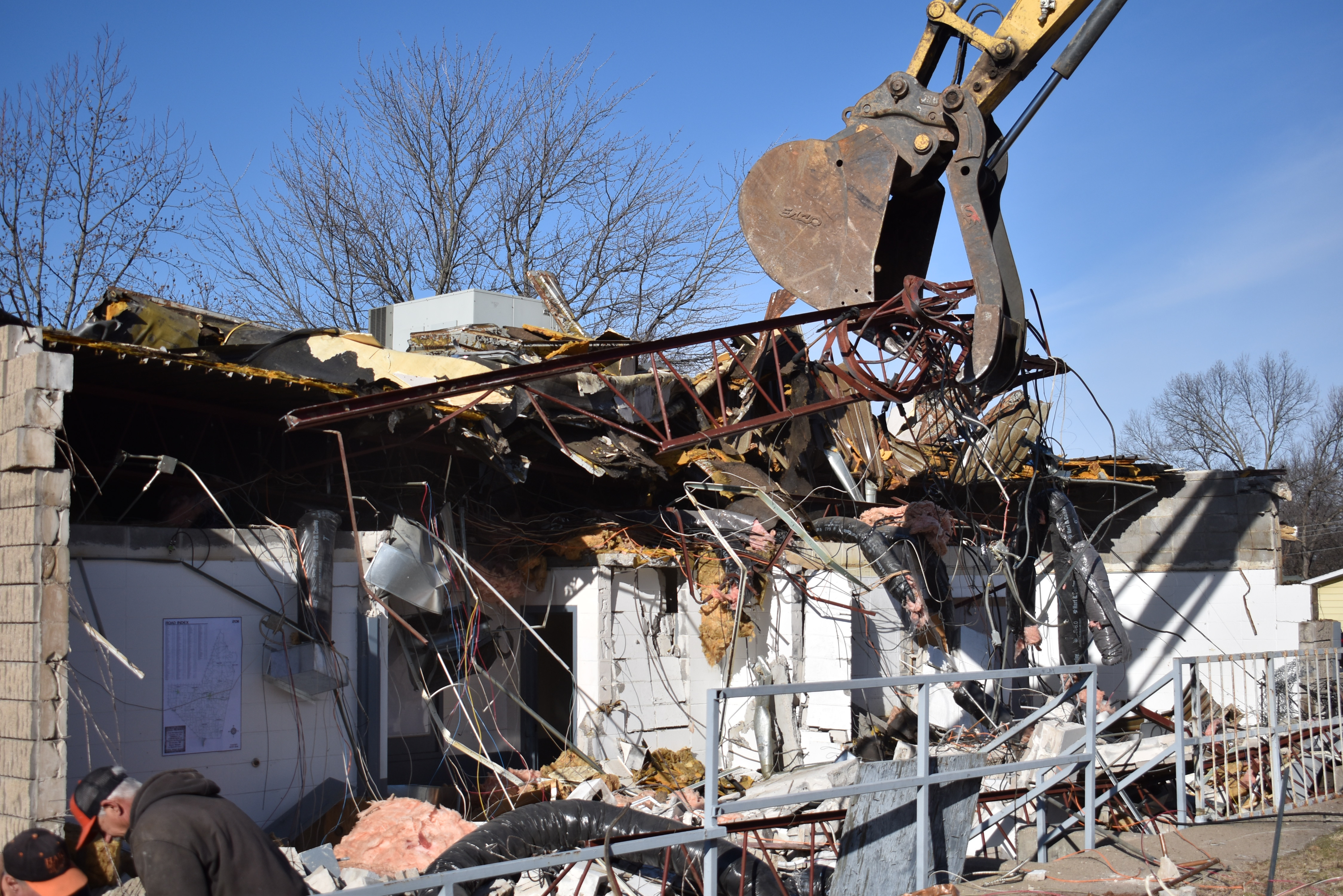 Democrat photo/Garrett Fuller — Tony Haile, owner of Haile Excavating Inc., uses his excavator Friday (Jan. 6, 2023,) to move a pile of twisted metal and wiring from the former Moniteau County Jail during its demolition. 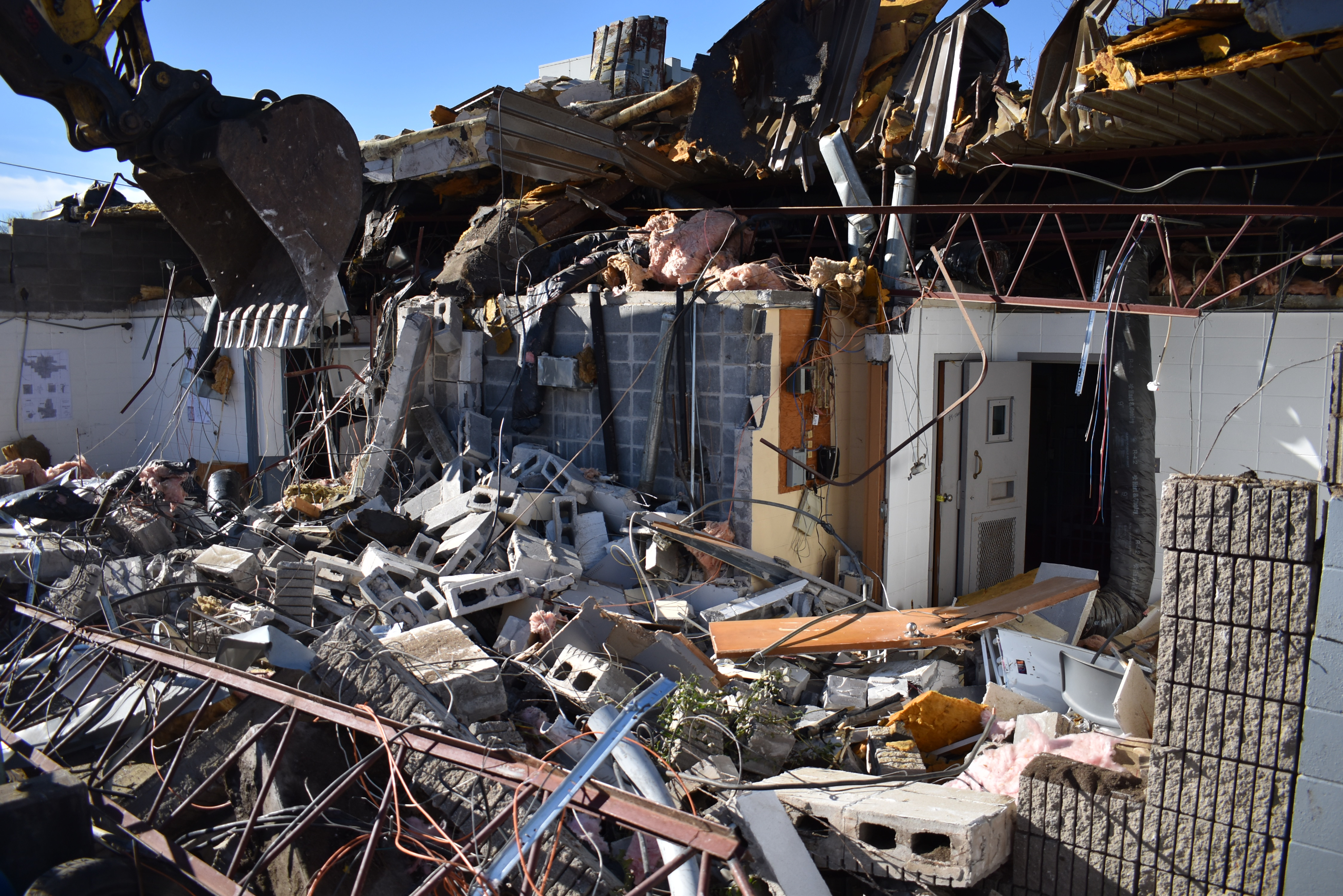 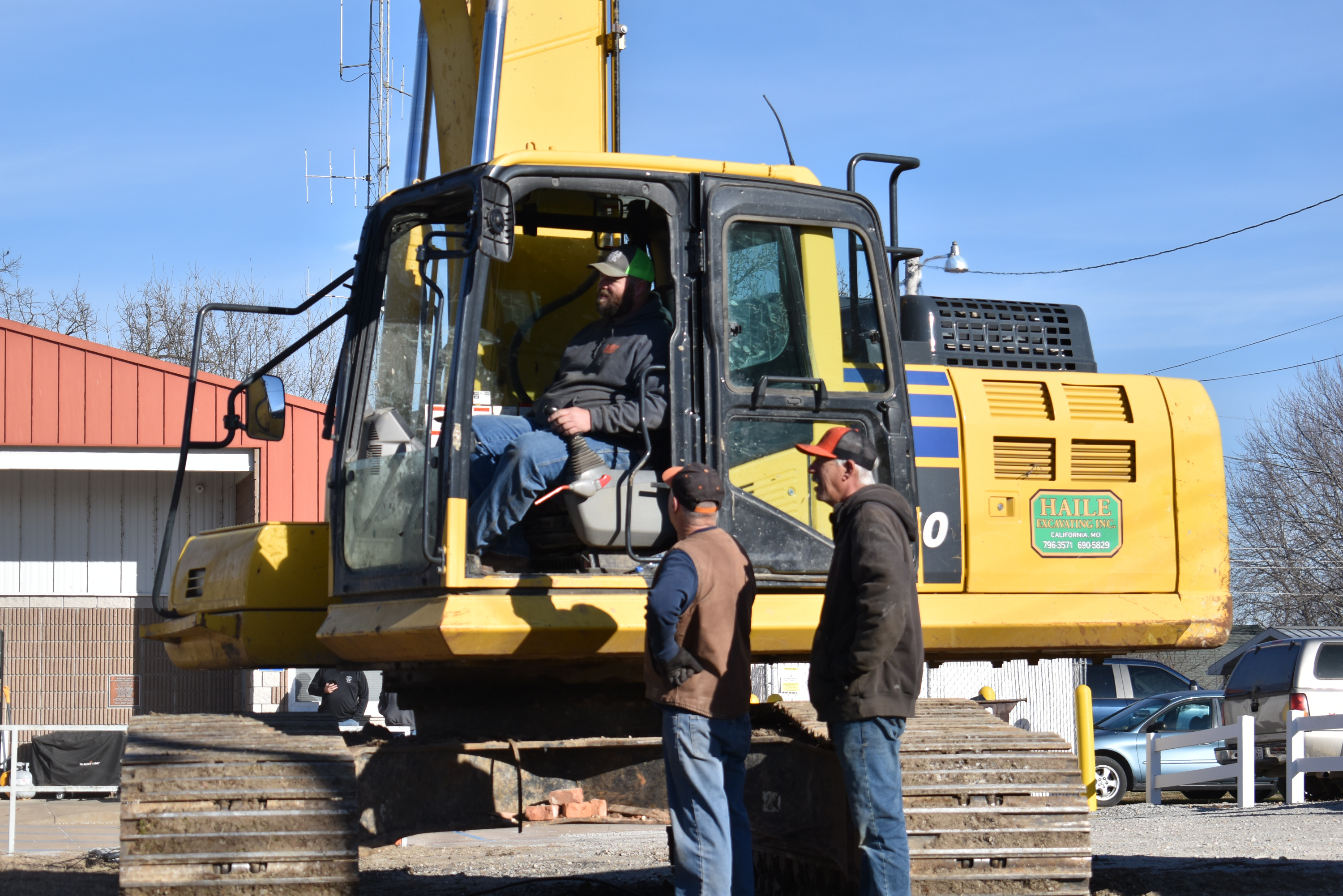 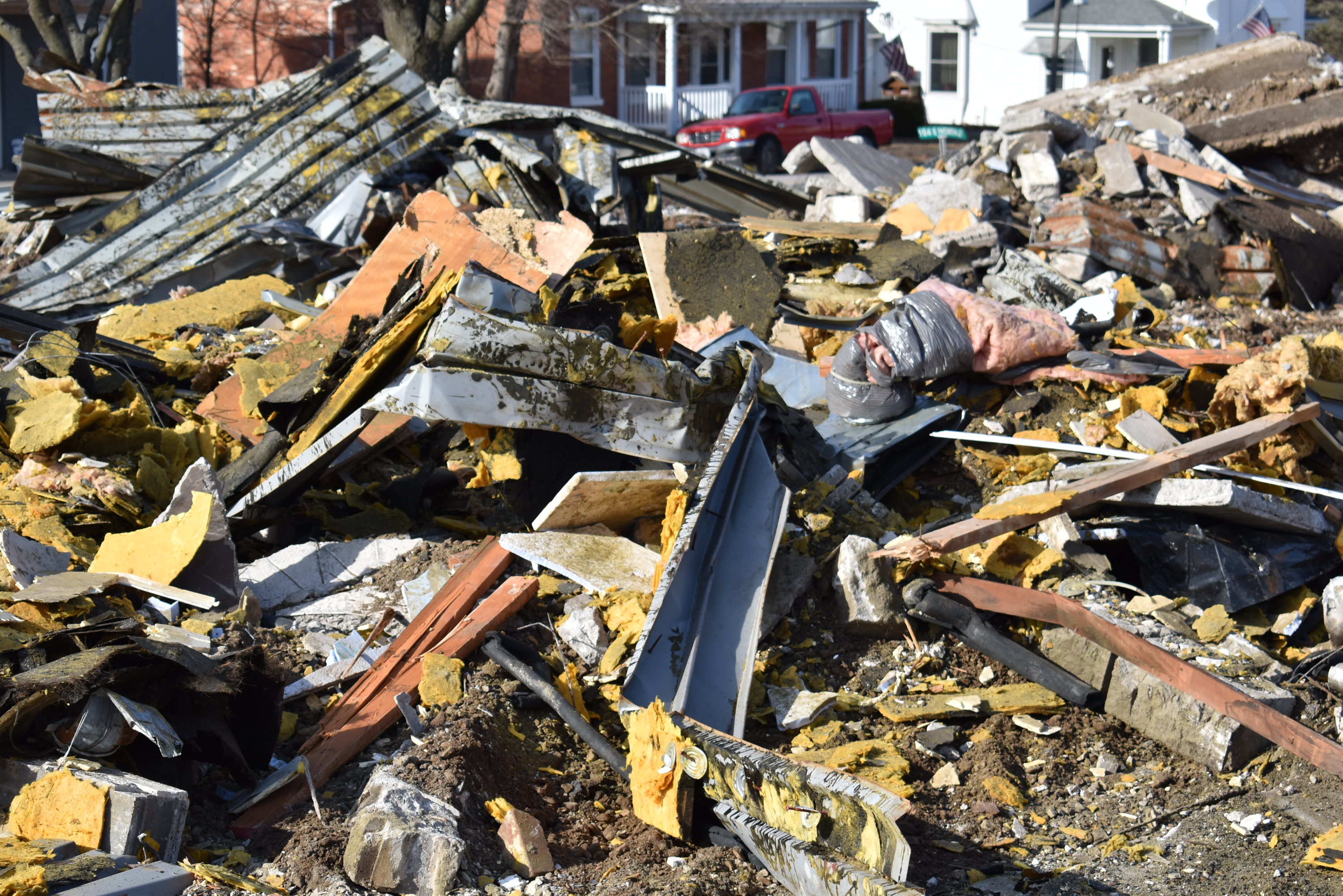 Democrat photo/Garrett Fuller — Insulation, wood, concrete blocks and other building materials lay in a pile Monday (Jan. 9, 2023,) after the former Moniteau County Jail was demolished Friday (Jan. 6, 2023). The facility, located on the northeastern corner of North Oak and East North streets, was constructed in 1980-81 after a fire damaged the original jail beyond repair. Inmates and jail staff moved to the current jail in 2013, with the Moniteau County Sheriff's Office completely vacating the facility in 2018.