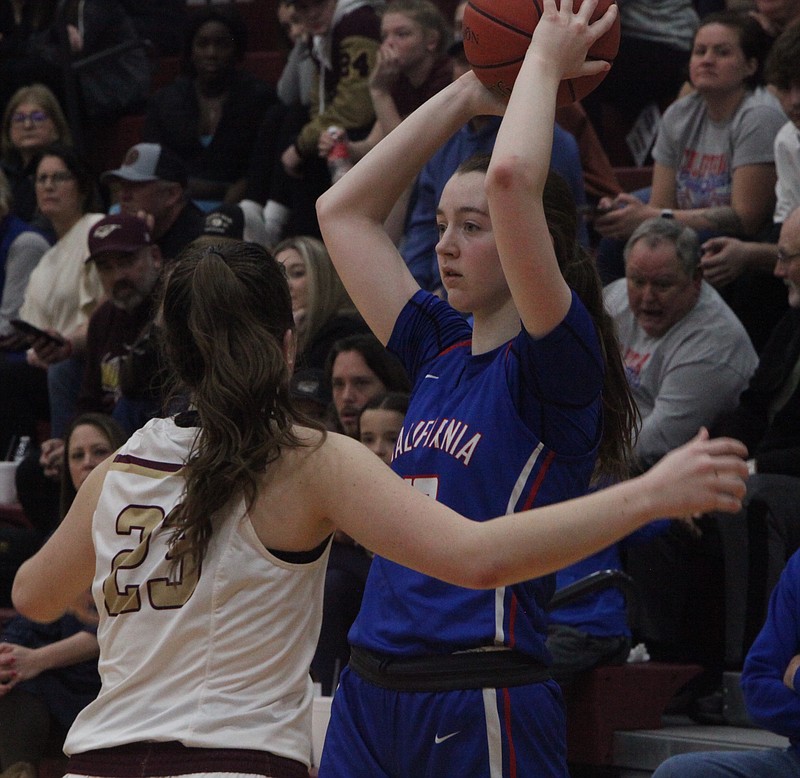 A Tri-County Conference rivalry was reignited Thursday night when the California Lady Pintos faced the Eldon Lady Mustangs on the road. California defeated Eldon three times last season and looked to continue a nine-game winning streak against the Lady Mustangs.

The Lady Pintos extended that win streak with a 70-64 victory against the Lady Mustangs.

Three days earlier, the Lady Pintos got a signature win against the Fatima Lady Comets. The Comets were ranked No. 6 in Class 4 by the Missouri Basketball Coaches Association, while the Lady Pintos were ranked No. 8 in the class. California was the underdog that night as they would have to find a way to win without star player Lauren Friedrich, who was in Columbia, signing her letter of intent to play college basketball at Stephen College.

California surprised the Lady Comets by taking the game right to Fatima and won 52-42. While many people saw the win against the Lady Comets as the best win of the season, California head coach Bobby Sangster said that win was just as important as all the rest.

"All wins are important to the season. The Fatima game was a great environment and experience for our ball club," Sangster said. "As for Lauren, I am very happy that she is going to Stephens College. They have a program with a great coach and teammates. I can't wait to see where her basketball journey will end up when she goes off to play for them."

In Thursday night's game against Eldon, the Lady Pintos got off to a great defensive start and shut down the shooting of Eldon's talented backcourt of Sydney Halderman and Haley Henderson. California opened the game on a 14-3 run with Friedrich coming in off the bench. The Lady Pintos shot 6-of-7 from the free-throw line in the first quarter, and although Henderson scored five straight points to end the quarter for Eldon, California still lead 14-8 after eight minutes.

The second quarter began with a special moment for Eldon. Halderman drove down the baseline and hit a bank shot off the glass to become the 11th player in Lady Mustangs history to score 1,000 career points, doing so in only her junior season.

That history-making basket was the start of Eldon's first attempt at a comeback. Eldon cut the California lead down to four with about three minutes remaining in the half. However, California pushed the lead back up to nine after Friedrich made a basket with 4.4 seconds left in the half.

Ahead 31-22 at the start of the second half, the Lady Pintos remained in control of the game, but they knew Eldon was going to play differently in the second half. After the Lady Mustangs made it a three-point game, California responded with two 3-pointers from Friedrich and Rademan to go up by 10. Despite Eldon junior guard Jaci Mueller exploding for 3 three-pointers and 11 points in the third quarter, California still maintained a 46-40 lead going into the fourth.

The Lady Mustangs started the fourth quarter on an 8-3 run and to make it a one-point game at 49-48. California was feeling the pressure of letting the lead slip away for the first time all game, but just when it looked like the game was in jeopardy, Friedrich emerged.

Coming back in off the bench, Friedrich made a three-point play on California's next possession to push the lead up to four, but she didn't stop there. The Stephens College signee followed up the three-point play with back-to-back 3-pointers, as part of 10-0 individual run.

Bolstered by 10 straight points from Friedrich, the Lady Pintos now had a double-digit lead once again. Although the Lady Mustangs tried to extend the game with fouls in the final minute, California held on for a six-point win to go to 9-3 on the season.

With their win against the Lady Mustangs, California has now 10 straight games in the rivalry going back to 2018. Sangster knows how talented of a team the Lady Mustangs are and said California's current streak has a lot to do with luck in beating a consistent team like Eldon year after year.

"Luck has been on our side during this streak. Eldon versus California is always a tremendous competition and we're very fortunate to have beaten them that many times," Sangster said. "Sydney Halderman is a great player that has performed at a high level for them for a long time. I have nothing but respect and congratulations for her getting to 1,000 points."

Despite not closing the game the way he would've liked, Sangster liked the way his team didn't let the pressure get to them and how they were able to take care of business in those moments of the game.

"I was very proud of how we responded to the runs that they put together in the second half. Lauren had been sick and we were no sure what her availability was going to be for the game. So the girls did a nice job of showing mental toughness, with or without Lauren, during those stretches," Sangster said. "It was a good win for us and we look forward to playing in our tournament this week. It's always a great week of basketball and hopefully the weather holds off so we can play."

California played Fulton on Monday night in the opening round of the California Tournament, winning 55-21, and will play Moberly tonight in the semifinals. 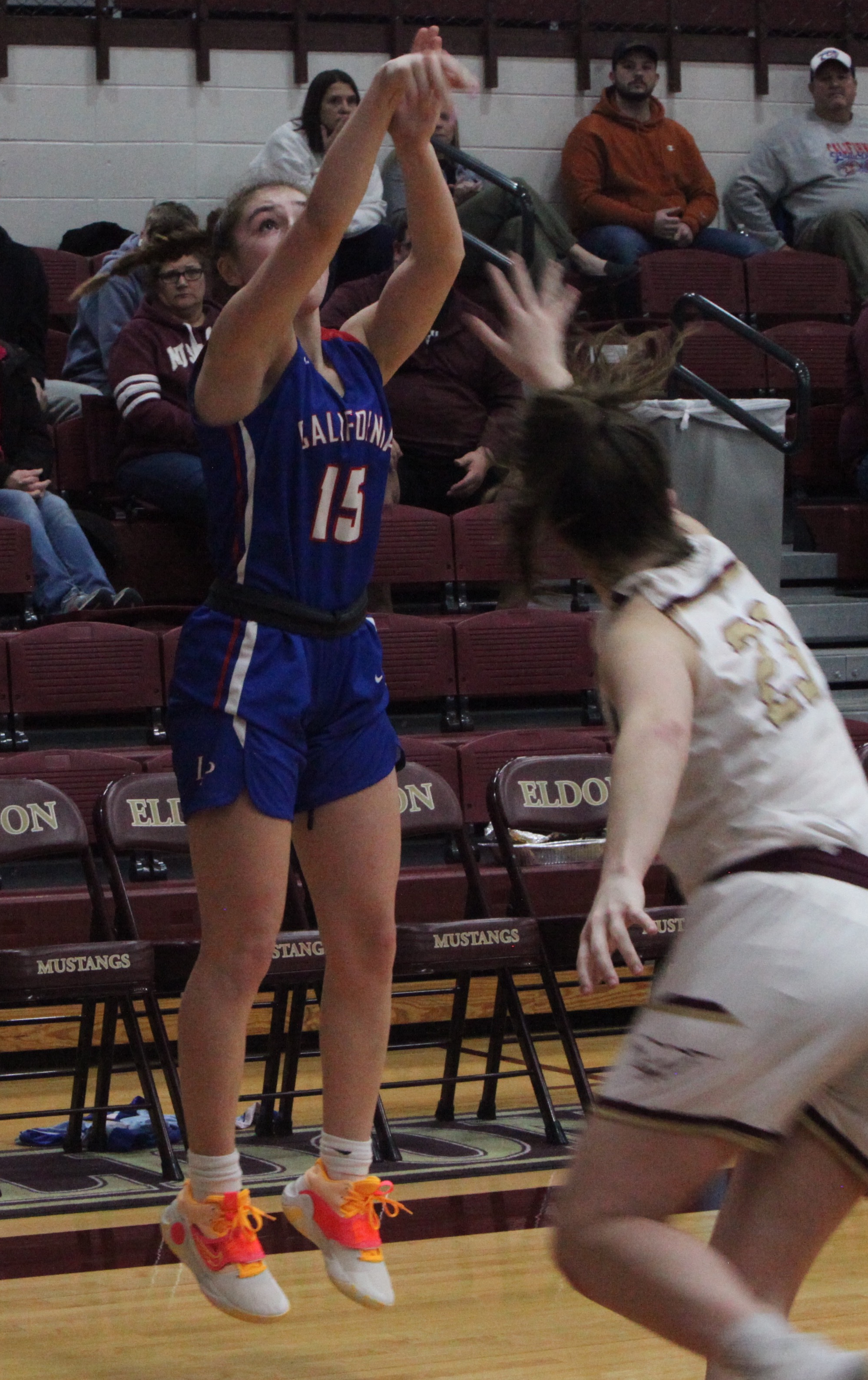 Sophomore guard Hailey Rademan hits a three-pointer to put California up by 12 in the fourth quarter. Rademan had a solid game with 19 points, two assists, two rebounds, a steal, and a block. (Democrat photo/Evan Holmes) 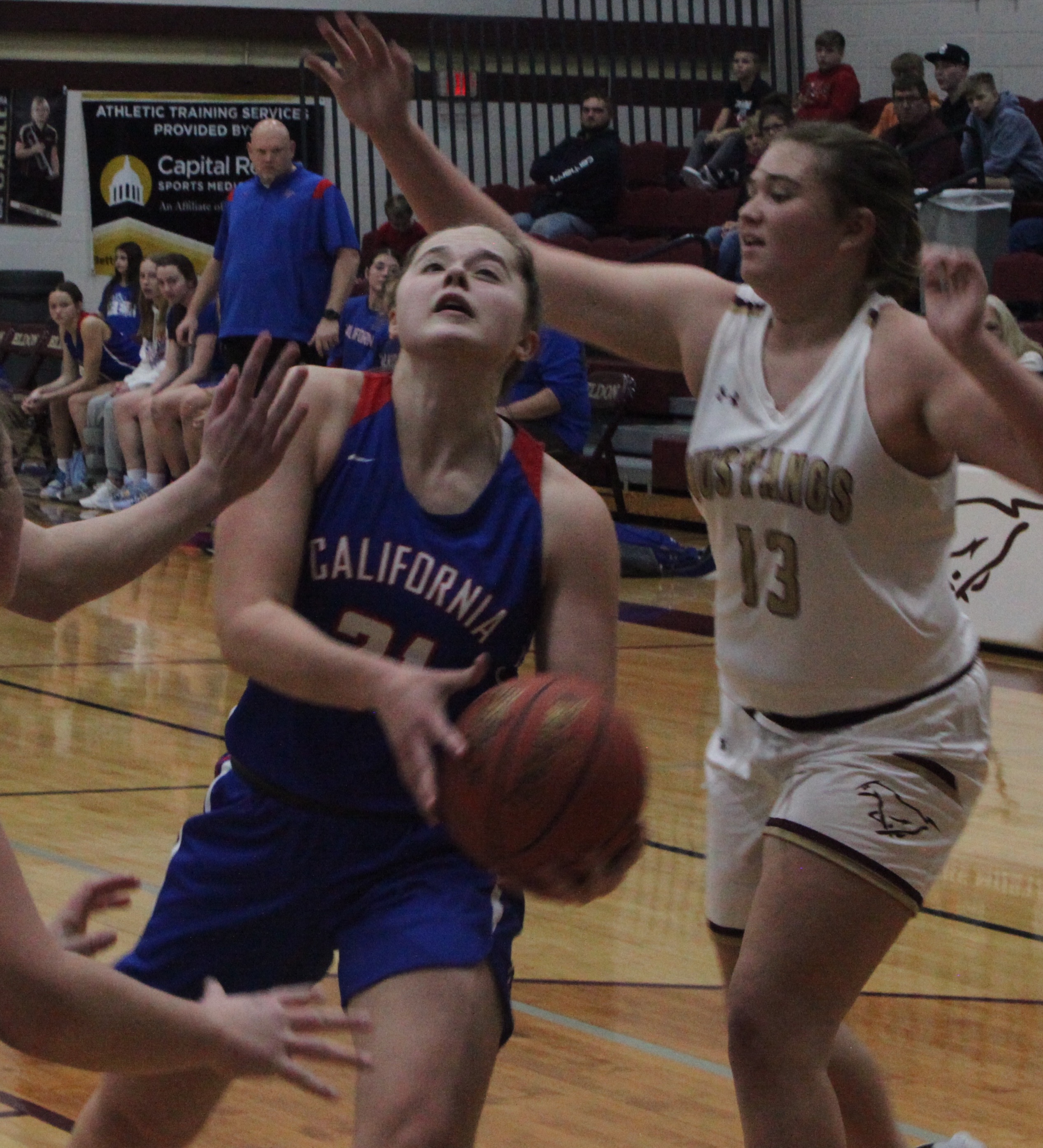 Junior forward Isabelle Rohrbach slices threw the Eldon defense and draws a foul. Rohrbach made all eight of her free throws and finished with 14 points. (Democrat photo/Evan Holmes) 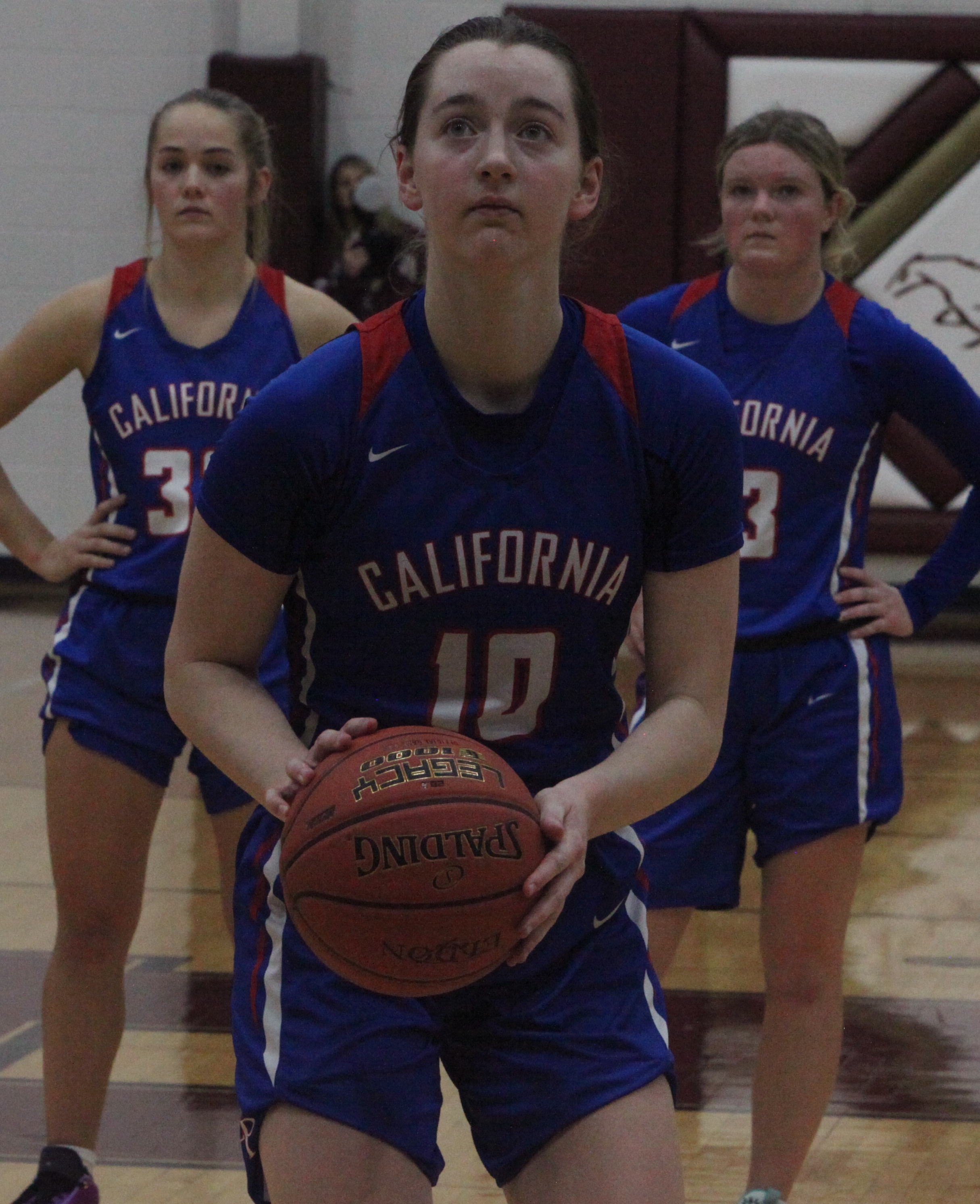 Senior Lauren Friedrich steps to the foul line for a three-point play in the fourth quarter. (Democrat photo/Evan Holmes) 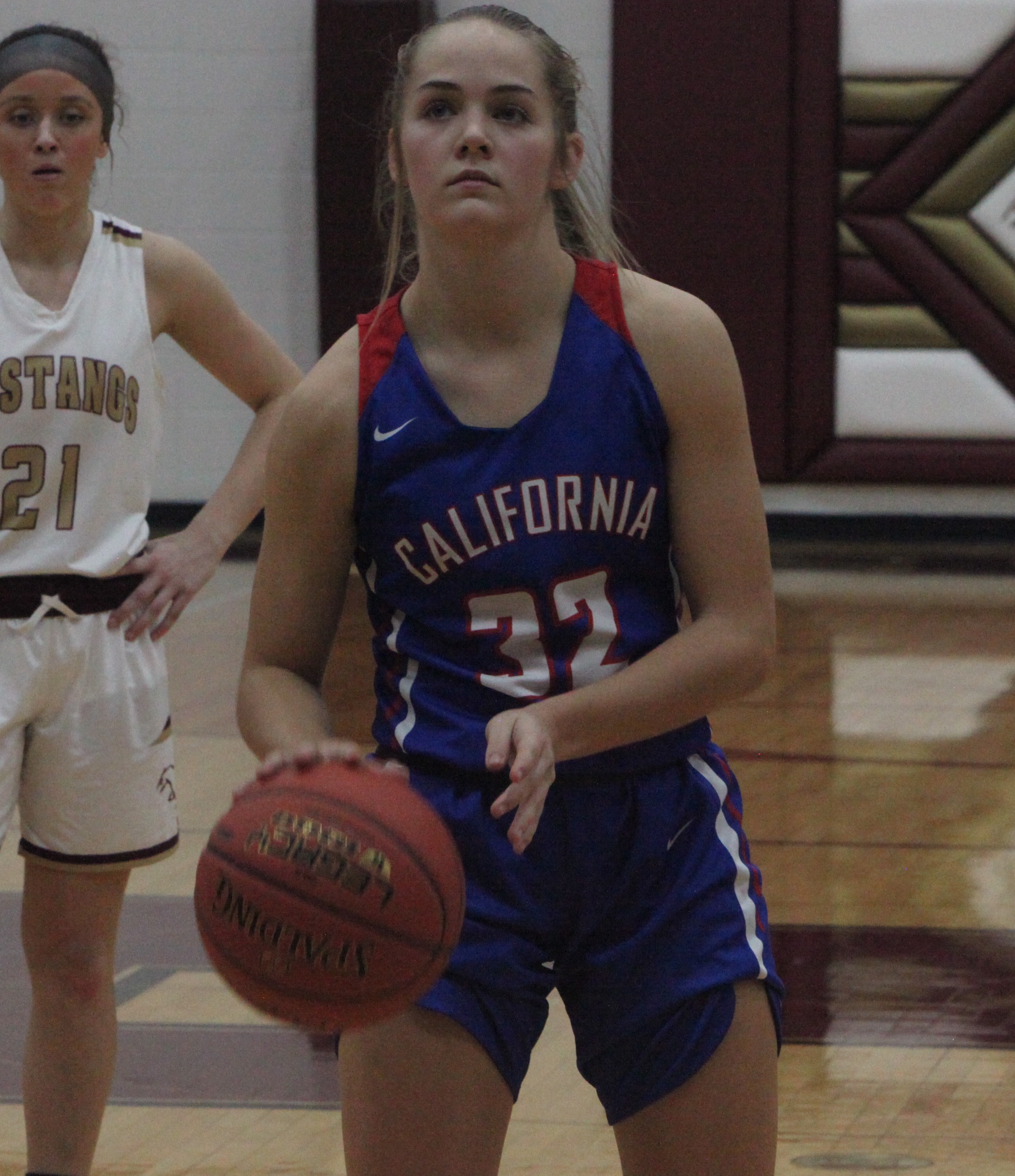 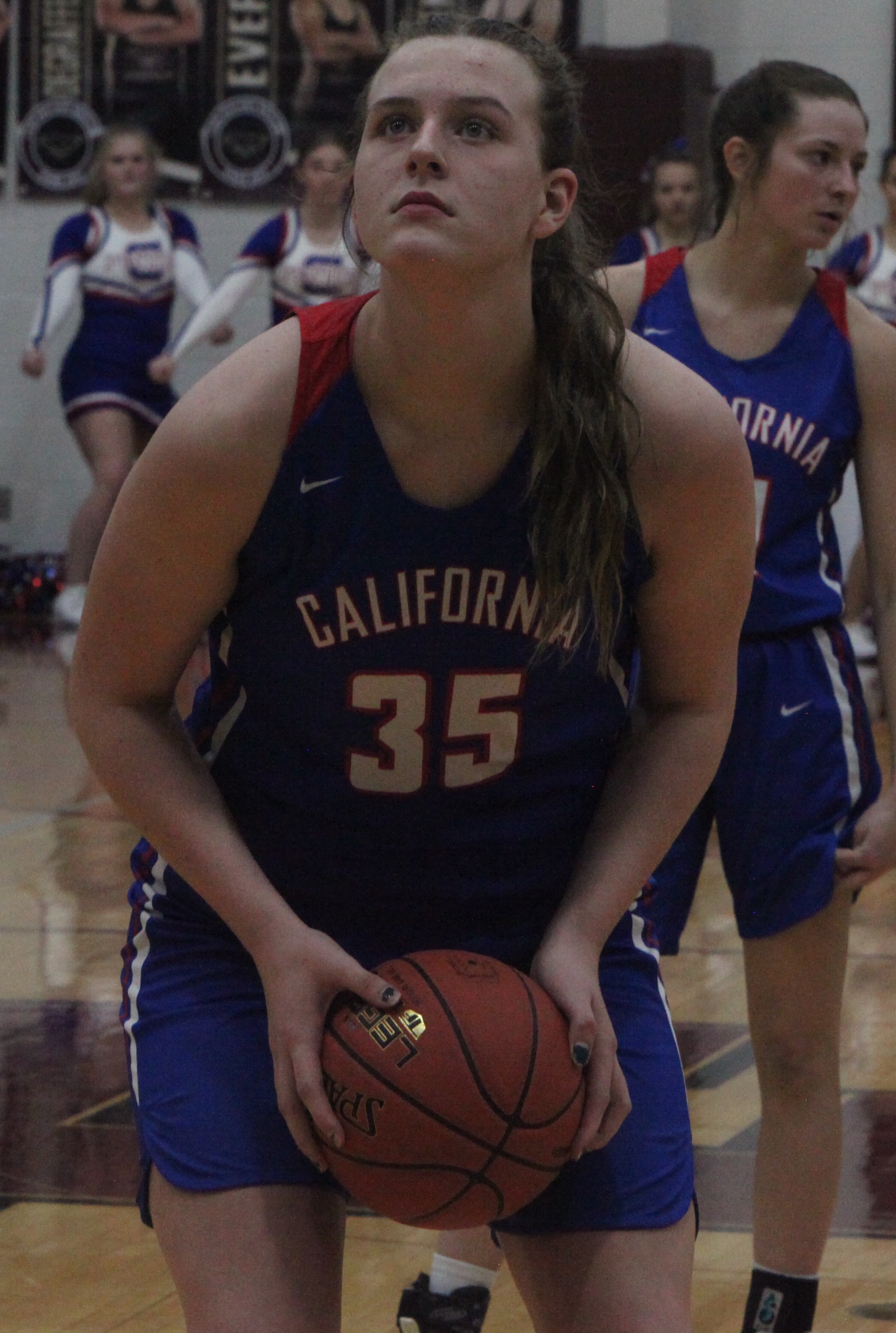 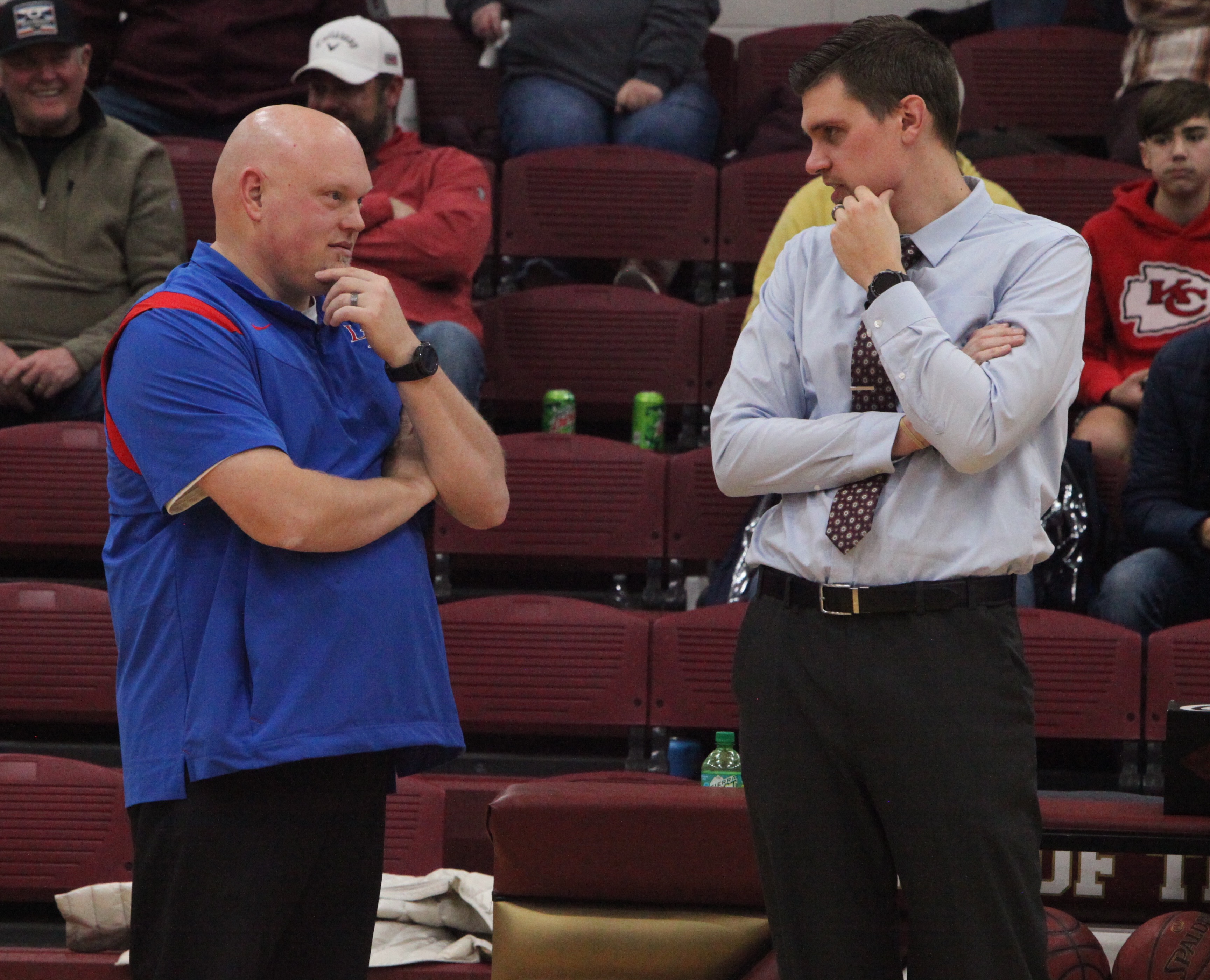