The Lady Pintos had won their tournament every year since the 2018-19 season and looked to do it again as the No. 2 seed.

After taking care of business in their first two games against Fulton (55-21) and Moberly (65-56), California earned a date with the Columbia-Battle Lady Spartans for the tournament title. The championship game was a low-scoring, defensive-minded game that saw Battle take a seven-point lead in the fourth quarter. However, California took advantage of a couple of missed opportunities by Battle and sent the game to overtime. Where the Lady Pintos used their free throw shooting to pull away in the final minute and stole the game and the tournament title from Battle.

Going into Saturday's championship game, Columbia-Battle was having their best season in program history with 12 wins in their first 14 games, their defense allowing only 33 points per game. The Lady Spartans also upset California in last season's Hermann Tournament 58-53.

California decided that if they were going to knock off the No. 1 seed of the tournament, they would have to match Battle's defensive pressure and make every one of their points have to be earned. The Lady Pintos came out in the first half with a 1-3-1 zone defense to take away the middle of the lane and force the Lady Spartans to work harder for shots.

However, the Lady Pintos were having their own troubles with the stubborn defense of the Lady Spartans, who held California to only one basket and five points in the first quarter. Battle senior guard broke loose and hit two three-pointers in the first quarter to put Battle up 10-5 after eight minutes of playing time.

The defensive display continued in the second quarter and Battle was still ahead by four. Until an unexpected source, freshman center Addie Carr, helped California draw even at halftime with six straight points in the final 1:43 minutes of the first half to make the score 16-16.

The teams continued to stay even in the third quarter up until the final minute. With the score tied at 28-28, Battle hit the last two shots of the half. First, a floated off the glass by sophomore forward Jaleah Brookins and a left corner three-pointer by senior guard Maliyah Miller as time expired.

With their five-point surge, the Lady Spartans took a 33-28 lead into the final quarter.

Miller added insult to injury for California by knocking down two more three-pointers in the fourth quarter to give Battle the biggest lead of the game by either team at eight points. Battle was now back in control of the game and looked to deliver the final blow, but the Lady Pintos defied the odds by getting to the free-throw line. The Lady Pintos put the Lady Spartans in foul trouble in the closing minutes and were able to knock down five of six free throw attempts in the quarter.

While Battle missed three straight free throws with less than a minute left to give California some life.

However, when Miller hit another three from the left corner with 33.4 seconds left to put Battle up 47-43, it seemed to be the final dagger in California's heart.

California senior forward Lauren Friedrich quickly raced back down the floor and hit a driving layup off the glass to make it a 47-45 game with 23 seconds left.

On Battle's next possession, junior forward Ella Bailey fouled Battle guard Tayla Robison and gave the sophomore two free throws to put the Lady Spartans up by four with 13.2 seconds to play. Robinson, who missed two free throws earlier in the quarter, missed both free throws again and California now had a chance to make a two-to-tie and a three-to-win.

With 3.3 seconds on the clock. Friedrich caught the inbound pass and drove to the rim for the tie, but was fouled on the drive by Brookins with one second left and went to the foul line to tie the game. Despite Battle taking a timeout to try and ice Friedrich, the senior stepped up and made both free throws to send the game into a four-minute overtime.

Battle was stunned by the turnaround of events and in the overtime session, California grabbed control of the contest. With Friedrich and Bailey scoring eight of California's nine points in overtime, the Lady Pintos built a five-point lead. Down the stretch of overtime, California's defense got the stops it needed and California stole the game and the California Tournament championship from Battle 56-51 in overtime. With their come-from-behind win over the Lady Spartans, California won their namesake tournament for the fifth straight year.

Friedrich led the Lady Pintos to victory with 21 points, eight rebounds, three assists and two steals. Friedrich missed California's first game of the calendar year against Fatima with a fever and influenza. Since then, Friedrich has averaged 18 points, seven rebounds, two steals, and a block per game over five games.

Bailey had her first double-double of the season on Saturday night with 15 points and 10 rebounds. Sophomore guard Hailey Rademan also added 11 points.

In the game, both teams were almost even in shooting percentage. California shot 38 percent and Battle shot 37 percent. However, the biggest statistical difference in the game was California made 21-25 free throws for 87 percent, while Battle made just 5-14 free throws for 36 percent.

The Lady Pintos followed the excitement of their tournament win with a convincing 66-34 win over the Hallsville Lady Indians on Monday night. California (13-3) is now on a seven-game winning streak and will look to increase it to eight on Thursday night at Skyline. 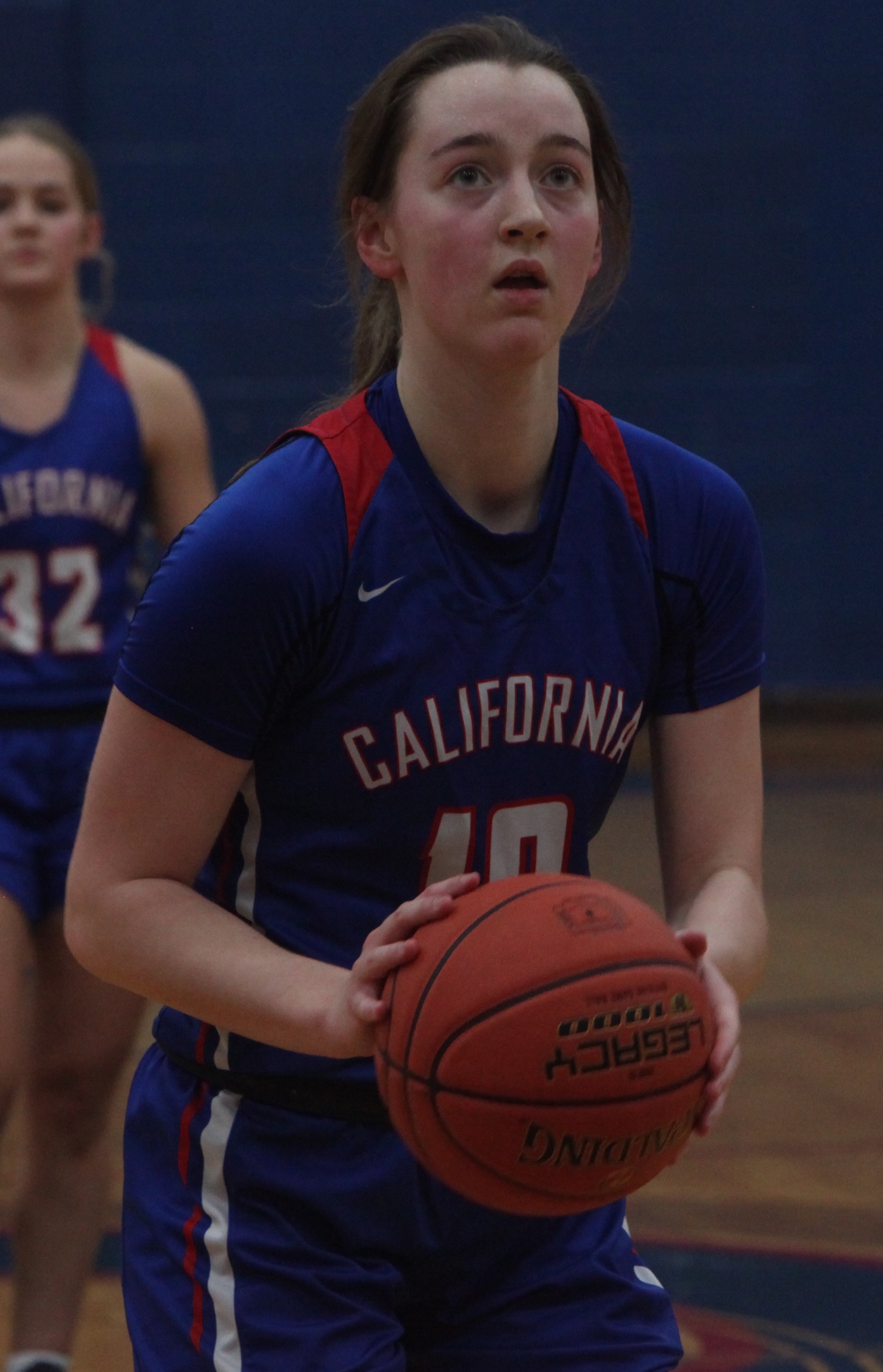 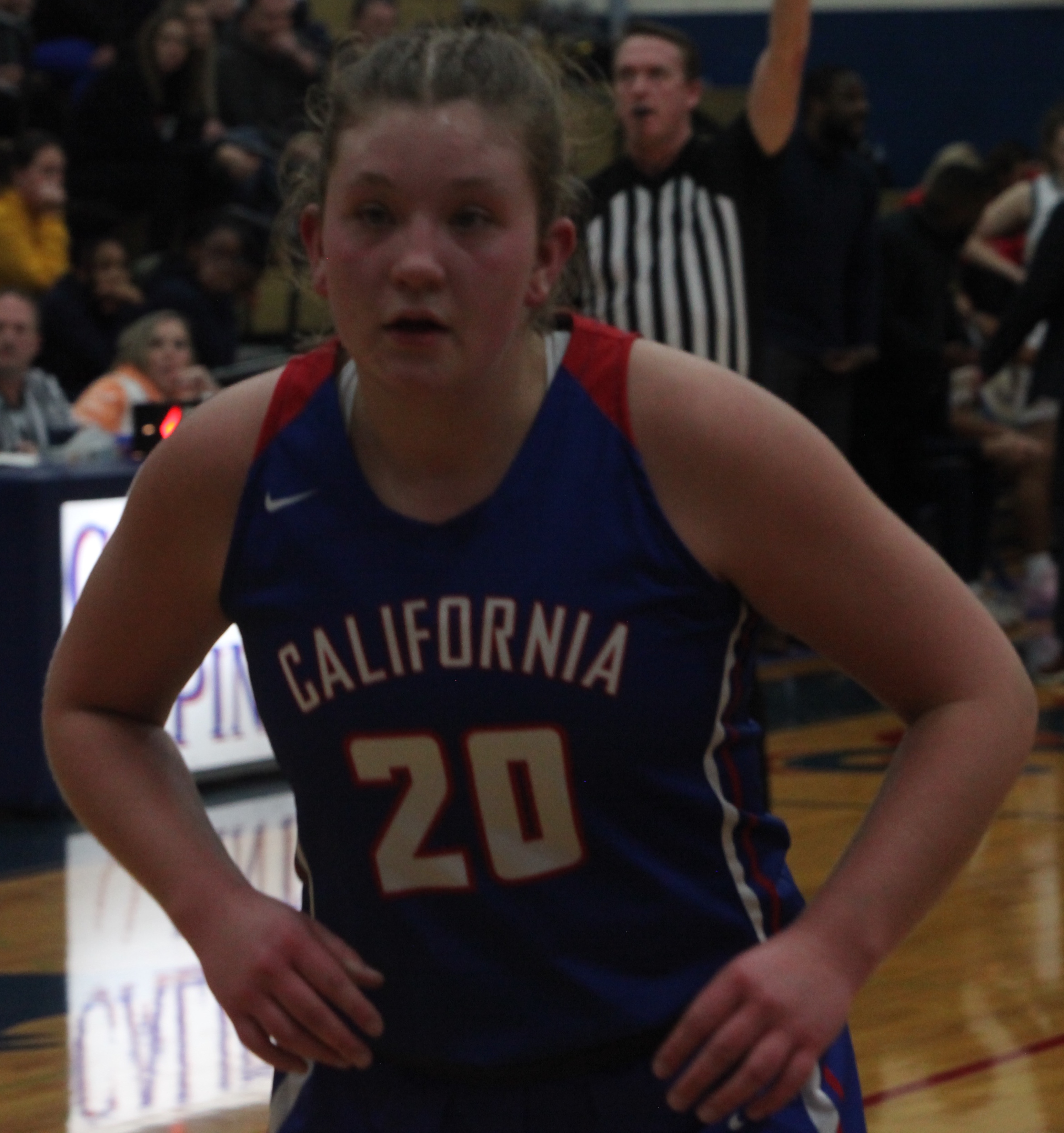 Junior center Ella Bailey had a double-double with 15 points and 10 rebounds against Columbia-Battle on Saturday night. (Democrat photo/Evan Holmes) 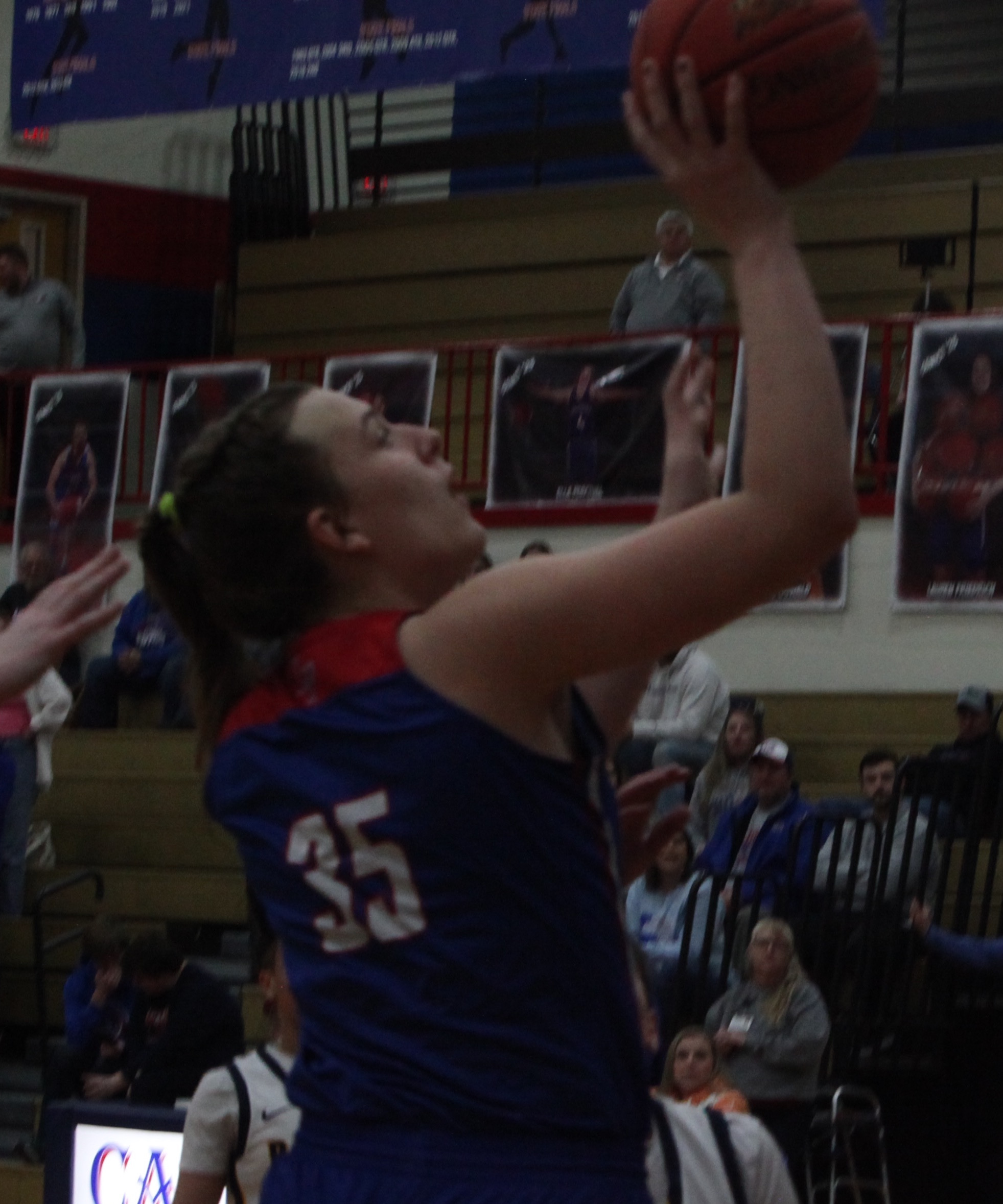 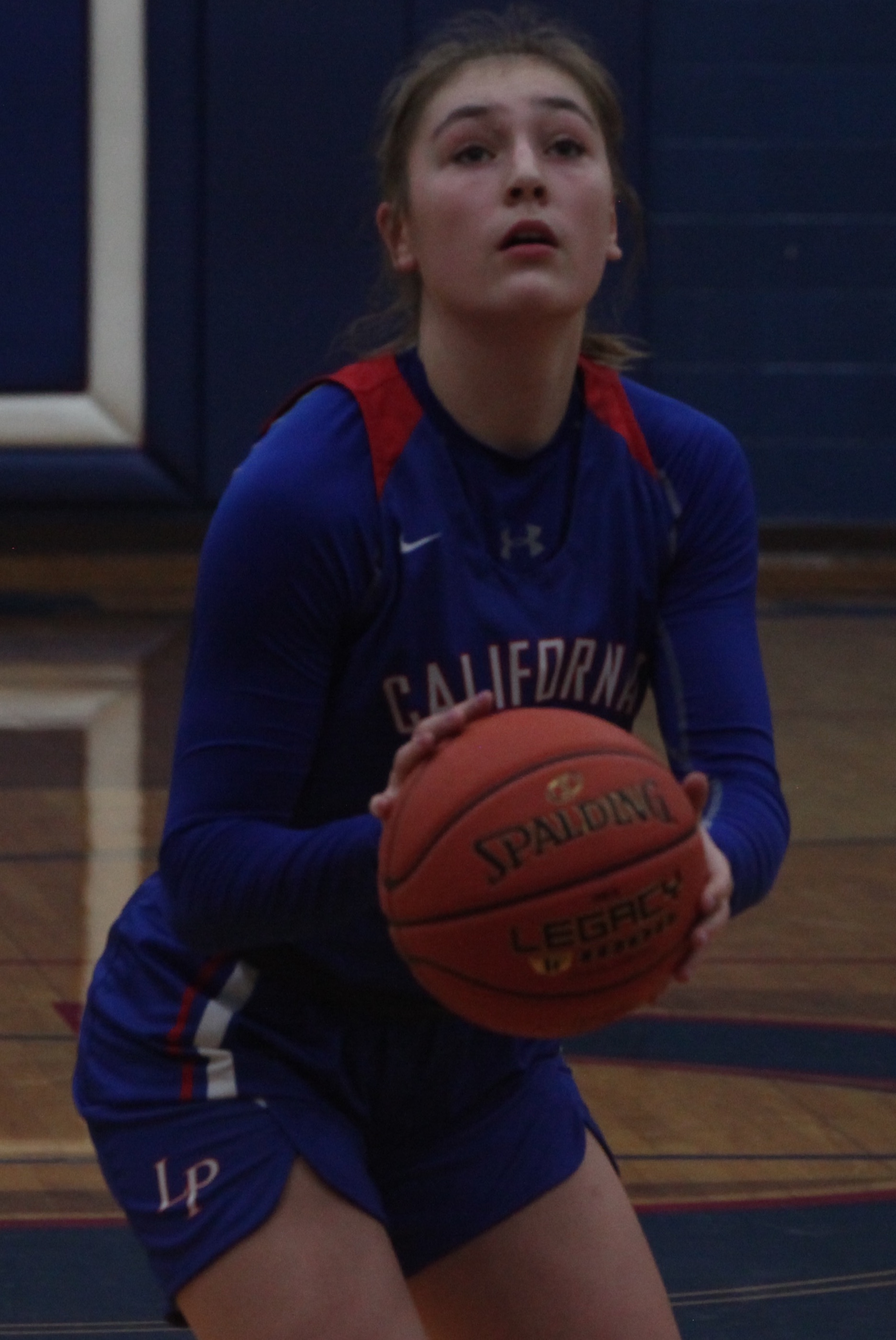 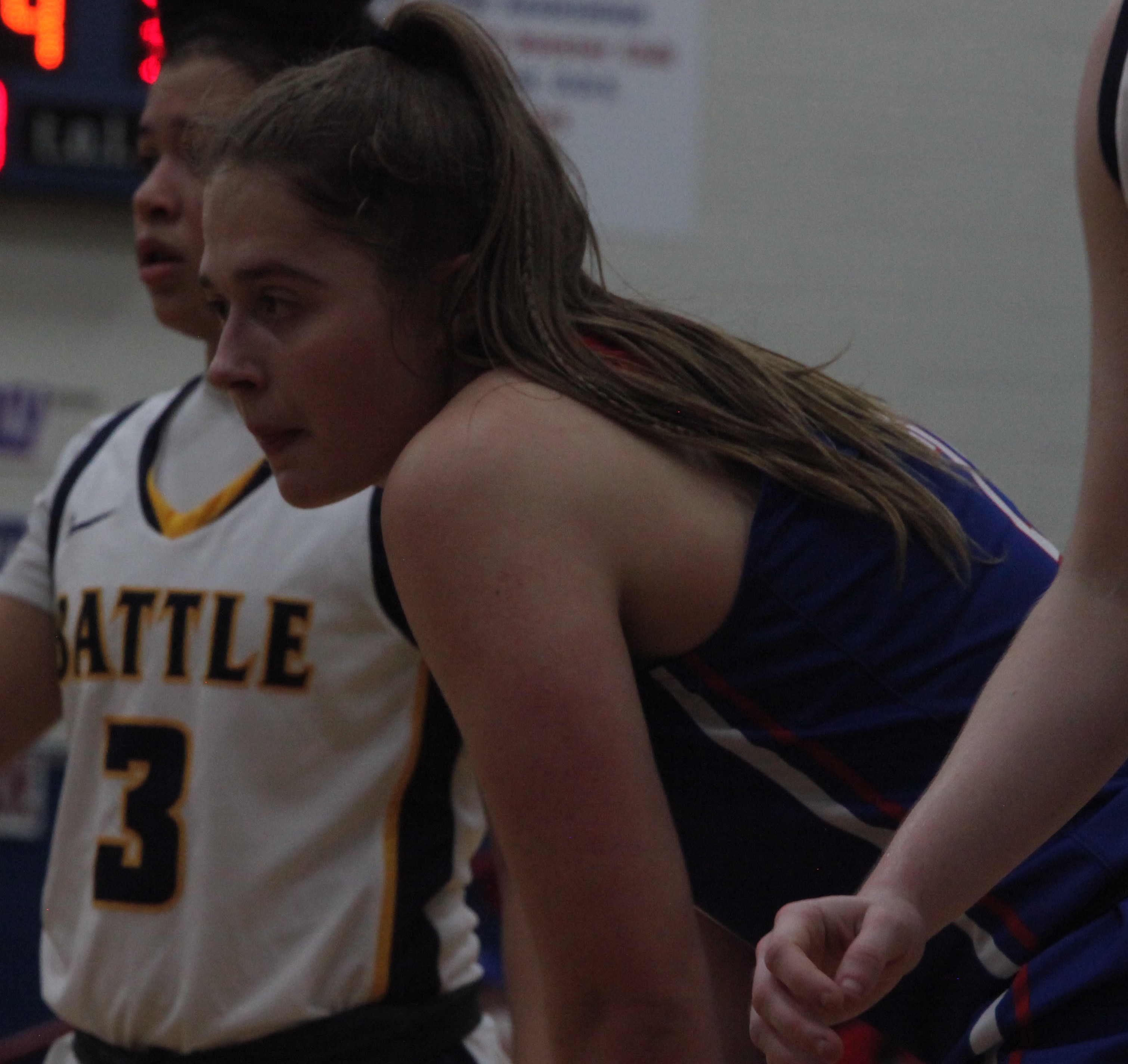 Junior guard Isabelle Rohrbach gets set to box out Columbia-Battle's defender's for a rebound off a missed free throw. (Democrat photo/Evan Holmes)