Parson makes I-70 a focus for budget heavy on infrastructure, education spending 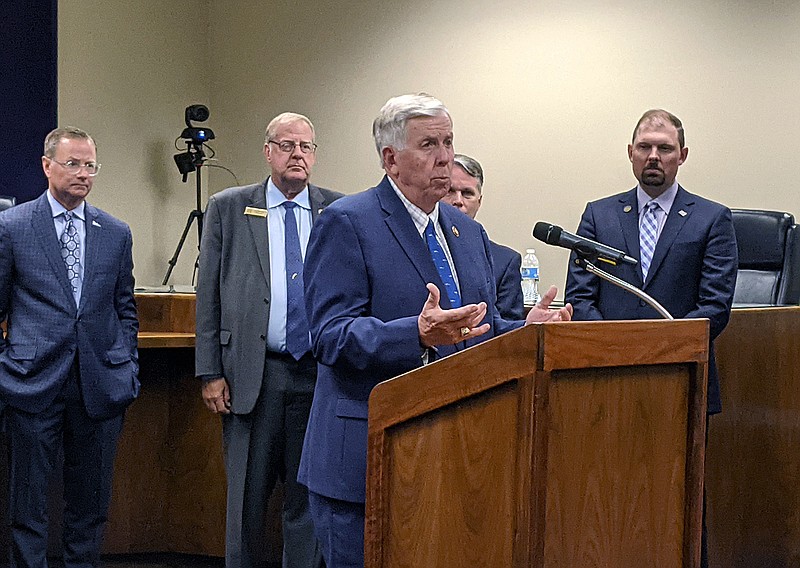 Missouri Gov. Mike Parson speaks during an announcement of the contractor selected for the Rocheport I-70 bridge replacement Thursday, July 1, 2021.

In his budget proposal delivered to lawmakers Wednesday, Parson asked for $859 million from the more than $5 billion in surplus general revenue to widen the highway in suburban areas of Kansas City and St. Louis and through Boone County near Columbia.

The proposal is just a piece of a project Missouri Department of Transportation officials estimate would cost $2.7 billion if I-70 was widened statewide.

In his State of the State speech, delivered to a joint session of the legislature Wednesday afternoon, Parson said congestion on I-70 is both dangerous and a drag on the state economy.

Overall, Parson is proposing a $51.6 billion state budget, with $14.3 billion in spending from the general revenue fund. The state has a general revenue surplus of about $5.2 billion, the largest in its history, and the budget plan would leave about $4 billion in the bank at the end of the coming fiscal year, state Budget Director Dan Haug said during a briefing before Parson laid out his proposal to lawmakers.

"We're trying to work it down gradually, responsibly," Haug said. "The governor is adamant that he wants to leave the state in a better position than when he came in."

The budget anticipates a significant slowing of state revenue in coming months. General revenue has been growing at double-digit rates for 30 months but this year's growth is expected to be less than 2 percent.

Several factors, from an income tax cut last year and a slowing economy to an anomalous rush of revenue from capital gains will play into the slowdown in tax receipts, Haug said.

That slowdown has not materialized. Through Tuesday, state general revenue was up almost 15 percent for the fiscal year.

If the current growth rate continues, the surplus could grow by as much as $1.8 billion.

A conservative estimate that undershoots revenue is better for the state than an estimate that overstates receipts, House Budget Committee Chairman Cody Smith said.

Other major initiatives in the budget include:

• More than $700 million dedicated to public schools, including $233 million for school transportation and a promise that schools can count on it in future years as well, $117.5 million more for the foundation formula and $56 million for pre-kindergarten programs. Parson also wants to set aside $250 million as cushion against possible education spending cuts in future years.

• More than $400 million for higher education, including almost $71 million to fund a 7 percent increase in state support for public colleges and universities, $272.4 million for construction projects and $25 million to prepare the state for semiconductor manufacturing.

In advance of Parson's speech, the Independent spoke with key legislators on the House and Senate appropriations committees, who said they expected many of the items Parson is now proposing.

While it is not a new initiative, Parson's budget will continue a program that pays 70 percent of the cost for schools to pay every teacher at least $38,000 a year. But he did not ask lawmakers to set that as the base in state law.

Increasing the minimum pay for teachers to $38,000 will cost $29 million; increasing the statewide average of $51,557 -- 47th in the nation -- will cost $81 million for each $1,000, according to the Teacher Recruitment and Retention Blue Ribbon Commission report issued in October.

A permanent increase in transportation funding, along with growing revenue from a sales tax distributed on a per-pupil basis, means schools will have more state money than ever next year.

"I like the idea of funding public education and letting locals determine how to spend it," Smith said. "I would like to think that they know that they need to prioritize teacher pay. But here we are with underpaid teachers."

"I would argue we need to get to $40,000 pretty fast, to keep up even with just neighboring states, let alone to just hire quality people in this economy and pay people close to what they deserve," Merideth said.

Addressing the state's need for child care has been near the top of the agenda for leaders of both parties and for business groups like the Missouri Chamber of Commerce. Parson proposed $78.5 million to increase subsidies that help low-income families pay for child care and pass incentives including tax credits for businesses to provide on-site childcare.

The boost to funding for pre-kindergarten means "50 percent of all our families with pre-k students will be able to enroll their children in expanded programs through their local school district or charter school at no cost," Parson said.

"Good child care is preparing those kids for the start of their education, so it all works in concert, right?" Hough said.

Parson last week revealed one of his big proposals for the year -- an 8.7 percent pay hike for state employees, equal to the inflation adjustment added to Social Security checks this month.

In his speech, Parson said the increase, along with a $2 an hour differential for night work in jobs responsible for people under the care of the state.

"With more than 7,000 positions open across state government, this wage increase is necessary, and it is the minimum we must do," Parson said.

But he also said Democrats need to be muted in their praise for what they like in Parson's budget so Republicans won't decide they don't like them.

"They have gotten to a place where they have demonized Democrats for so long, that when I say, 'Hey, the governor is doing a good thing with you know, adding child care or a teacher pay raise,' they get angry at him," Rizzo said.

The I-70 proposal will not use any federal highway funds, but the state will be looking to leverage its influence in Congress to help widen the highway to three lanes in each direction statewide.

Missouri has members of Congress in charge of key committees where money could become available. U.S. Rep. Sam Graves of Tarkio chairs the Transportation Committee and U.S. Rep. Jason Smith of Salem chairs the Ways and Means Committee.

"We certainly are going to be very aggressive working with Congress," Haug said, "to pull down as many federal funds as we can on this."

The Missouri Independent, www.missouriindependent.com, is a nonprofit, nonpartisan news organization covering state government and its impact on Missourians.