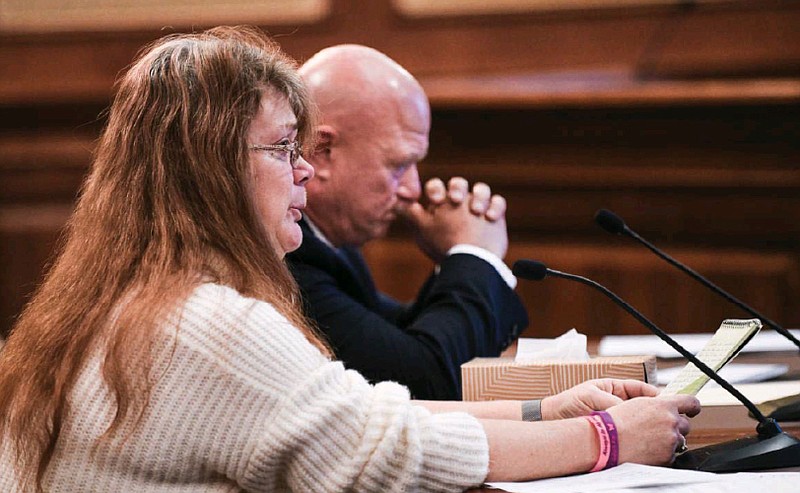 With tears running down her cheek, Patty Preiss tries to maintain her composure as she testifies before Missouri legislators Monday, Jan. 23, 2023, on behalf of legislation sponsored by Sen. Mike Bernskoetter, in background, who sponsored SB22. The bill would modify provisions relating to eligibility for parole. Preiss is the mother of Elizabeth Olten who, at age 8, was killed by 15-year-old Alyssa Bustamante on Oct. 21, 2009. Bustamante was tried as an adult and sentenced to life in prison. (Julie Smith/News Tribune photo)

A Missouri lawmaker wants to remove the option of parole for juveniles who commit second-degree murder and serve at least 15 years in prison.

The measure — resurrected by Sen. Mike Bernskoetter, R-Jefferson City, after it failed to get to the governor’s desk last session — drew emotional public testimony at a state Senate hearing Monday.

The parents of a murdered 9-year-old Jefferson City girl stood in support of the bill while the Missouri ACLU and others cautioned against it.

Bernskoetter testified murderers should live with their consequences.

“At some point, everybody knows that murder is wrong, don’t they?” he said.

An individual can be charged with second-degree murder for knowingly causing the death of someone else or purposely causing serious injury that results in death. The charge is less severe than first-degree murder, which is a premeditated, intentional killing, but more serious than voluntary manslaughter, which is typically considered a “heat of passion” murder.

Second-degree murder is a Class A felony, which is the highest level felony in Missouri. Sentences are based on the circumstances of the crime and can range from 10-30 years or life in prison without the possibility of parole.

Typically, offenders who are under the age of 18 when a crime takes place are eligible for parole after serving 15 years of their sentence. Through state statute, Missouri has denied the possibility of parole for people who are younger than 18 when they commit first-degree or capital murder.

SB 22, Bernskoetter’s bill, would add second-degree murder to the statute — denying the option of parole for those who commit the crime when they are younger than 18.

“It has been at the discretion of prosecutors to bargain down convictions to murder two when the facts of the case would support a conviction for first-degree murder or capital murder — this has been done in good faith over the years with prosecutors and victims agreeing to lesser sentences that still include significant jail time,” Bernskoetter said Monday. “When the current law was changed, it effectively resulted in the rug being pulled out from underneath victims and their families.”

Bernskoetter’s bill reverses a change the state Legislature made in 2021 through an omnibus sentencing bill that Gov. Mike Parson signed into law. Sen. Tony Luetkemeyer, a Parkville Republican and chairman of the Senate Judiciary and Civil and Criminal Jurisprudence Committee, said last year he believed it was the House that dropped second-degree murder from the statute dictating parole restrictions.

“I think it was probably just missed as part of that process at the end of session,” Luetkemeyer said.

Bernskoetter filed the same bill restoring second-degree murder parole restrictions last year. It received a hearing and was passed out of committee as a provision of an omnibus bill. Bernskoetter said it was then lost to the Senate’s congressional redistricting fight.

Bernskoetter’s sponsorship of the bill is tied to a local case from 2009 involving Alyssa Bustamante, a 15-yearold girl who killed her 9-year-old neighbor Elizabeth Olten. The 9-year-old was strangled and stabbed eight times, according to her mother.

Bustamante told investigators she committed the murder because she wanted to know what it felt like to kill someone. She detailed the murder in her diary and called it “ahmazing.”

Bustamante was charged with first-degree murder but took a plea deal and was convicted of second-degree murder with the possibility of parole. She was given a life sentence in 2012, which will be followed by a 30-year sentence for armed criminal action.

With the way the law is currently written, Bustamante could be eligible for parole on the murder charge as early as 2027.

Preiss recalled her final hours with her daughter and the process of learning about her death. Through tears, she described the state’s judicial system as “broken” because the county prosecutor reduced charges from first-degree murder to second-degree murder as a result of a case before the U.S. Supreme Court.

Bemboom said the bill passed in 2021 that granted juveniles convicted of second-degree murder the possibility of parole took power away from courts and failed his daughter. He urged lawmakers to reinstate the parole restriction as a standalone bill.

“You stole what little bit of justice she did get by letting her murderer have a chance for parole,” Preiss told the legislators at the hearing.

In 2012, the United States Supreme Court struck down mandatory life sentences without parole for children under 18 years old with its ruling in Miller v. Alabama.

In response, the Missouri Legislature in 2016 changed state statute to allow offenders sentenced to mandatory life in prison without parole to request a sentence review from the parole board after serving 25 years.

Amy Breihan, co-director of the Roderick & Solange MacArthur Justice Center Missouri office, leaned on the ruling during an informational testimony on the bill last year.

Breihan said the Supreme Court has upheld a string of cases based on the idea that children are less culpable than adults, even when committing serious crime, because their brains aren’t fully developed.

The Roderick & Solange MacArthur Justice Center is a civil rights, nonprofit law firm with a Missouri office located in St. Louis. Breihan didn’t testify in support or opposition, but for informational purposes only.

She said children’s lack of development means they are less deterred by punishment, more vulnerable to peer, familial or situational pressure, and their personalities less fixed, which means there’s a greater possibility for rehabilitation.

“These individuals are very low risk to reoffend,” Breihan testified last year. “Crime drops pretty significantly when someone is in their 30s and 40s — in other words, people age out of crime.”

“We believe that youth should be parole eligible — not that they are guaranteed parole, just that they have the option and go before the board,” Schafer said.

There are 190 offenders in Missouri prisons serving time for a second-degree murder they committed when they were younger than 18, according to the bill’s fiscal note. Of those 190 offenders, 13 wouldn’t be impacted by Bernskoetter’s bill because they had a prior release from prison.

“Given the parole board is currently reviewing these cases, DOC (Missouri Department of Corrections) assumes the passage of this proposal would result in these 55 individuals remaining in prison,” the fiscal note states. “It is unknown what fiscal impact this will have, as there is no way to determine how many of these individuals would have been denied parole by the board in any case and, therefore, how many offenders this change would truly be affecting.”

Whether offenders are released from prison is up to the Missouri Probation and Parole Board. Members of the board are appointed by the governor.

Michelle Smith, co-director of Missourians for Alternatives to the Death Penalty, said SB 22 indicates the state Legislature doesn’t have confidence in the parole board.

“I felt like the filing of this bill and pushing it forward means that there’s no trust in our parole board…” she testified in opposition Monday. “I just feel like this a show of no-confidence in their work and their role looking at every individual person.”

The argument was echoed by a bevy of former prisoners who offered testimony in opposition to the bill Monday.

Norman Brown was released from prison in 2021 after serving 31 years of a life sentence he was handed down when he was 15 years old. He became eligible for parole after lawmakers dropped second-degree murder from statutes restricting parole eligibility.

He has since started a business, opened lines of financial credit and pays taxes, he said.

“It was said that people like me would be good for nothing but murder. That I would be an individual who would get out of prison and kill again and murder and wreak mayhem on my community. Nothing is further from the truth,” Brown said. “I spent my time rehabilitating myself and educating myself to be able to care for myself once I was released from prison.”

Bryan Seddons, also released in 2021, was sentenced to life without parole as a juvenile in 1990 for his connection to a drive-by shooting. He said he was asleep in the back seat when it happened.

Seddons said he wanted to testify Monday to give lawmakers a better idea of what it’s like to be serving time in Missouri prisons at a young age. He recalled being stabbed in the face by another offender and often witnessing sexual assaults.

“I was affected, and it damaged me, and I’m still damaged right now to this day,” he said. “Still damaged … My face is that of a neglected child, a child that was thrown into a prison and was raised by death row inmates.”

Luetkemeyer, the committee chair, said the testimony offered by Seddons was “disturbing” and that he would meet with corrections officials to learn more.

The Senate committee did not take action on SB 22 on Monday.