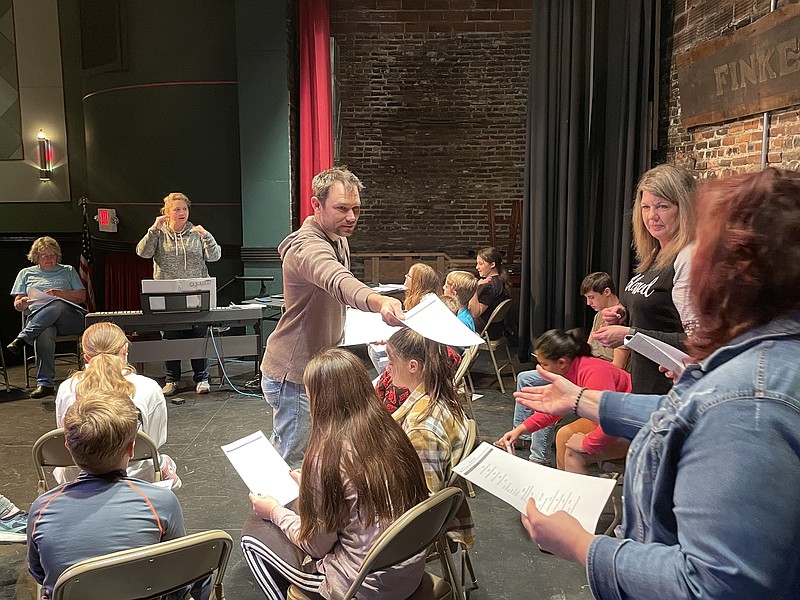 Democrat photo/Kaden Quinn Director Andrew Korte hands out music sheets to his cast as they rehearse for the Finke Theatre's latest production of the Disney play "Newsies."

The Finke Theatre will be bringing a famous Broadway production to California.

Director and Finke Theatre administrator Andrew Korte is preparing a big show for a small town. On April 21, 22 and 23, the Finke will be performing Disney's "Newsies" for audiences in the Mid-Missouri area.

Korte will work with a host of regional actors, both young and old, to create something new for local audiences. Although he said pre-production can be a very lengthy process, stretching throughout 10 months, once a show is cast, he can see the clay the theatre is working with.

"The cast is about 32 people, so it's one of the biggest shows that we've ever done. It ranges from ages 12 all the way through fifty-some-year-olds," Korte said. "So lots of people from within our local community here, in Jefferson City, Columbia, Versailles, Boonville, Wardsville, Lake of the Ozarks, people in the whole Midwest, Central Missouri area."

Korte said most of the show's actors have a history performing at other professional venues, including Capital City Productions in Jefferson City, the Royal Theatre in Versailles, the Fulton Theatre in Fulton and some traveling theaters.

He will also be working alongside assistant director Linda Pappert and music director Melody Starnes to help bring this show to life.

While some of the Finke's previous productions were original versions of famous plays and musicals, this year Korte confirmed the theatre's production of the "Newsies" is the original Disney broadway show.

"We actually purchased the rights through this company called MTI (Music Theatre International) and they actually license on pretty much all the Disney shows," Korte said.

He explained the way licensing works is after a production finishes its run on Broadway, it'll tour around the country, then once touring either slows down or quits the company offers it to local theaters to put on their own production.

Korte chose "Newsies" because he thought it would best serve the community, bringing in the right talent and interest to California.

"A few of the other theaters have done this show in the past, but not for several years," Korte said. "Capital City productions, they just got done doing 'Annie.' Versailles has done 'Mamma Mia.' So I kind of look at their schedules and see what has been played in the area recently. This show hadn't been done by anybody recently, so that was kind of a deciding factor."

The Finke Theatre decided to add a third showing to this year's roster due to the popularity of past shows, "The World's Greatest Showman" and "Southern Fried Funeral." Korte said it sold out immediately for its two most recent productions and the addition of a third day gives audiences more time to view it.

"I would say right now we're probably at least 50 percent sold on all three days and we have not even really hardcore advertised it yet," Korte said. "If it's sold out real quick here, we may even consider maybe even adding another weekend."

Korte said as long as people keep buying tickets, the Finke Theatre will keep adding dates. His goal is to not only entertain but leave an impression on audiences through upbeat song and dance production.

"I just hope everybody has a good time and enjoys seeing everybody dance. There's a lot of choreography and movement in the show, and the set is going to be fantastic," Korte said. "We have three big sections of scaffolding that are going to go up, so it'll be multi-level. There'll be guys up above and down below, and they'll be moving. It won't just be just flat on the stage, it'll be very multi-dimensional, and multi-level even. (The cast) may even come out into the audience a little bit. It'll be very interactive and just be a lot of fun."

The director said he and the board's mission at the Finke are to drive home the importance of the arts and the theater. Korte said he wants to develop a creative outlet for California that is as strong as local sports is to the community. It's about building a sense of camaraderie between residents, especially children and teenagers. He said performance arts can create an environment where kids can be active, work as a team and rely on each other for help.

"I feel like that's what builds a good fabric of a community, it's when people interact like that," Korte said. "We have great sports teams here in our community and they get a lot of support, and I think that's fantastic. But the arts, in my opinion, are equally as important. That's kind of what we try to provide here. That's why these musicals and plays and things that we put on here are so important and why we're trying to sort of expand that a little bit. To create a place where the community can come and create that fabric."