Future of potential soccer program up in the air 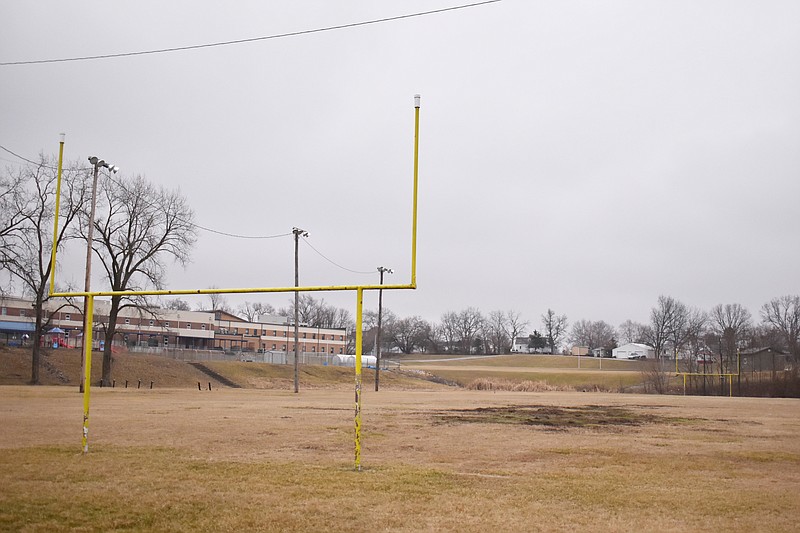 Democrat photo/Garrett Fuller — The former home of the California High School Pintos — Old Riley Field — may become a new practice field for a girls soccer program, if one is added. The field, seen Sunday (Jan. 22, 2023,), needs a lot of work to bring it up to par for use by athletes. For instance, the old end zone uprights pictured would need to be removed along with a light pole.

Despite lots of support, a school-sponsored girls soccer program may have to wait.

A room packed with proponents of a girls soccer program was met with disappointment as the board held an hour-long discussion surrounding the proposition of adding the program Jan. 18 at the California R-I Board of Education meeting in the high school media center. Budget concerns, conflicts with the track team and other needs within the district caused the board to table the addition of a girls soccer program, despite support and testimonies presented at the meeting. The board also discussed new seating for the high school baseball and softball field, heard a program spotlight on the elementary school SmartLab, and recognized two coaches.

Superintendent Daniel Williams opened discussion on the girls soccer program by presenting the results of a survey completed by girls in sixth through 11th grades. Of the 190 students surveyed, 66 percent said they would participate in soccer if it were offered at California High School. Eighty-eight percent of the participants said they have never played on a traveling or club soccer team, with 66 percent saying they've never played on a recreational team.

"These girls love soccer and we've just started a little Sunday, kind of, recreational get-together to play soccer," she said. "They called their friends, 21 or more girls showed up each night to play and they had so much fun we could barely get them off the field."

Bryant said there are three teams playing competitively in tournaments and intramural leagues. Another parent said California teams are able to compete head-to-head with teams from larger cities, such as Columbia and Jefferson City.

One parent argued a soccer program could help the athletes off the field -- with academics and the social aspect -- as well.

"California is amazing when it comes to our athletics, and even our academics, where it's a family. You guys, you've created an environment where these kids want to be a part of something. They want to be that teammate, they want to know somebody in the school's got their back," Julie Bleich said. "As (Bryant) said, there's some things these kids, this would be their only option ... So I just really think that it would help them academically because I can't be the only one in the room that went through high school thinking 'Basketball's the only reason I care about my grades.' It helps them to be a better well-rounded person, and I just completely believe that it would be a great asset for our kids."

One concern with adding a girls soccer program would be its effect on the track program. Some proponents of the soccer program said it wouldn't greatly affect the track team because they believed only two students for each track event would attend most meets. However, Seth Womack, high school athletic director, said track athletes can participate in up to four of the 19 events, and many events take more than two participants to most meets.

The main concern with adding a soccer program, however, was regarding how to pay for it.

Initial startup costs for a girls soccer program would be between $35,000-$38,000, with $14,000 in annual recurring expenses. The initial expenses would cover two goals, 30 uniform kits, supplies, coaches and maintenance required to bring Old Riley Field behind the elementary school back up to properly practicing. Recurring expenses cover coaches, equipment and ongoing field maintenance.

If California wished to host home games, an additional $34,000-$42,000 would be required for a scoreboard, player benches, bleachers, officials and field paint.

Williams said the district is projected to be deficit spending by $350,000 in the 2022-23 fiscal year. However, he is optimistic the district is on the right path to balancing the budget.

"I am very optimistic right now that we will be at a zero by the time we hit June 30," said Williams, referring to the end of the 2022-23 fiscal year for the district. "And part of that is just the budgeting process, where we have allocations for things that factor in for unknowns. A good example would be, say, we have an elementary construction budget that is just a placeholder."

Even if the budget is corrected, Williams said he would rather wait and see before spending big, such as on starting a girls soccer program.

"I couldn't in good conscience say that we add anything until we right our ship as far as our deficit spend," he said.

There are also other needs with higher priority, such as funding for early childhood programs. Paul Bloch, board member, said he's concerned about young students being left behind. Williams said early childhood programs have always been underfunded, based on how funds are allocated to districts for the program by the state. He said there are two ways to use state funds for early childhood students: One where at least 50 percent of the classroom is in an Individualized Education Program, or they could enroll the equivalent of up to four percent of their total free/reduced lunch population.

Zach Hackett, another proponent of the girls soccer program, suggested there are ways to minimize costs for starting a new program. The City of California could assist with maintaining Old Riley Field, and parents could get pledges from families and businesses to offset some costs. However, Williams also had concerns with starting a program on donations.

"I wouldn't be personally OK with recommending our board move forward with a one-year donation, because we don't want to build one-year programs. Once you bring it, the expectation is there forever," Williams said. "I wouldn't want to do that to our athletes, where as a freshman you can play but, all of a sudden, let's say the supporters of the program fell through or we didn't have somebody leading the charge for raising funds."

In addition to the girls soccer program, board members heard discussion surrounding another topic affecting Pintos athletics: seating at the baseball and softball facility at California High School.

While new bleachers are due to be installed prior to the start of the baseball season, families of baseball and softball players may be able to upgrade to more comfortable stadium seats located on the lower level behind the backstop.

Brad Berendzen said the combined booster club intends to install the first row of the new seats prior to the baseball season, but a second row will have to wait until the summer due to the need for risers. He said the club is still in the planning process with athletic directors, but the current plan is to install 40-50 seats between the dugouts.

The families of senior players would have priority in reserving seats, followed by the families of junior, sophomore and freshman players. If any seats remain after all player families had a chance to reserve seats, those seats would open to the general public. There will be a limit of four seats per family. Families who reserved seats would still be required to pay admission at all games.

Proceeds from seat reservations will go toward the combined booster club, which would in turn benefit the baseball/softball facility.

"This booster has really helped bring this field to where it's at," Berendzen said. "And if we could keep that going, that's only going to keep providing for that facility."

Williams said the new seats will not only add "pizzazz" to the stadium, but will also be a long-term money maker to the booster club.

A sample seat was delivered for district officials and board members to look at before continuing discussion on installation of the rest of the seats.

Prior to new business, board members learned about a program that acquaints elementary students with 21st-century skills in science, technology, engineering, art and math (STEAM).

Mazie Osman, SmartLab facilitator at California Elementary School, explained the SmartLab program emphasizes technology proficiency, reinforces academics and shifts students from extrinsic, or external, motivators to intrinsic motivators, such as curiosity or enjoyment of an activity.

Students in pre-kindergarten through fourth grade participate in SmartLab projects, where they explore a variety of technologies. The SmartLab is in its third year of operation. In its first year, Osman said California Elementary placed third in the national Learning Is Different Here contest, which earned it $3,000 to spend on additional materials for the classroom. The E.M. Burger Foundation helped initially fund the SmartLab, which was the first STEAM lab in the state at the time of its introduction.

In the SmartLab, students get four to five days to work on their projects. On day one, Osman said, students get to let their creativity and curiosity roam free.

"The kids have free reign to just explore, see what they can make their tools and technologies do all on their own with very, very minimal instruction from me," she said.

On day two, Osman presents a 5- to 10-minute "mini-lesson" on the type of project they're doing. Then, students are able to start planning and executing their projects, which continues into day three. On day four, students finish by sharing their projects through presentations or group exercises.

Osman said the class will prepare the students for their futures as technology continues to evolve.

"As I'm sure a lot of you know, technology is constantly changing," she said. "The technologies that I thought were very advanced when I was in elementary school are long extinct and retired. And so, I think, giving the kids these opportunities to stay up-to-date with the most modern tools and ideas that will lead them into their futures is huge."

In other business, the board:

• Approved May 30-June 23 as the dates for summer school. Transportation will be provided to summer school using Elementary and Secondary School Emergency Relief II funds to make up for lost learning.

• Approved raising the sending school and out-of-district tuition rate to $8,500.

• First read updates to policies and administrative procedures. Williams said most changes were mundane, either to address law changes or add clarifications.

The California R-I Board of Education will next meet at 6 p.m. Feb. 15 in the California High School media center. 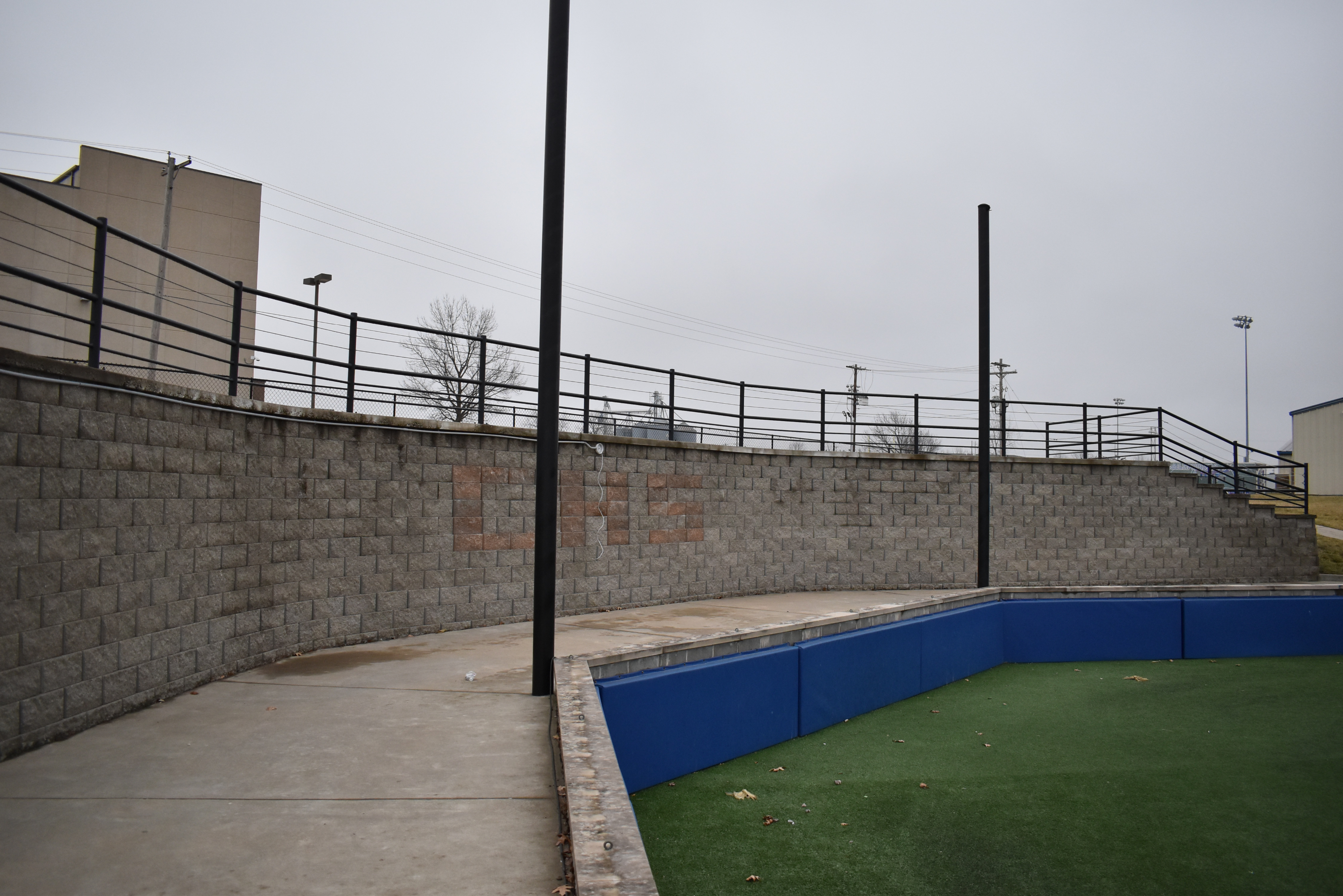 Democrat photo/Garrett Fuller — The booster club intends to install new stadium seating for player families on the lower level behind the backstop at California High School's baseball/softball facility. The club hopes to have a first row installed from dugout to dugout by the start of the baseball season. A second row would be added over the summer. 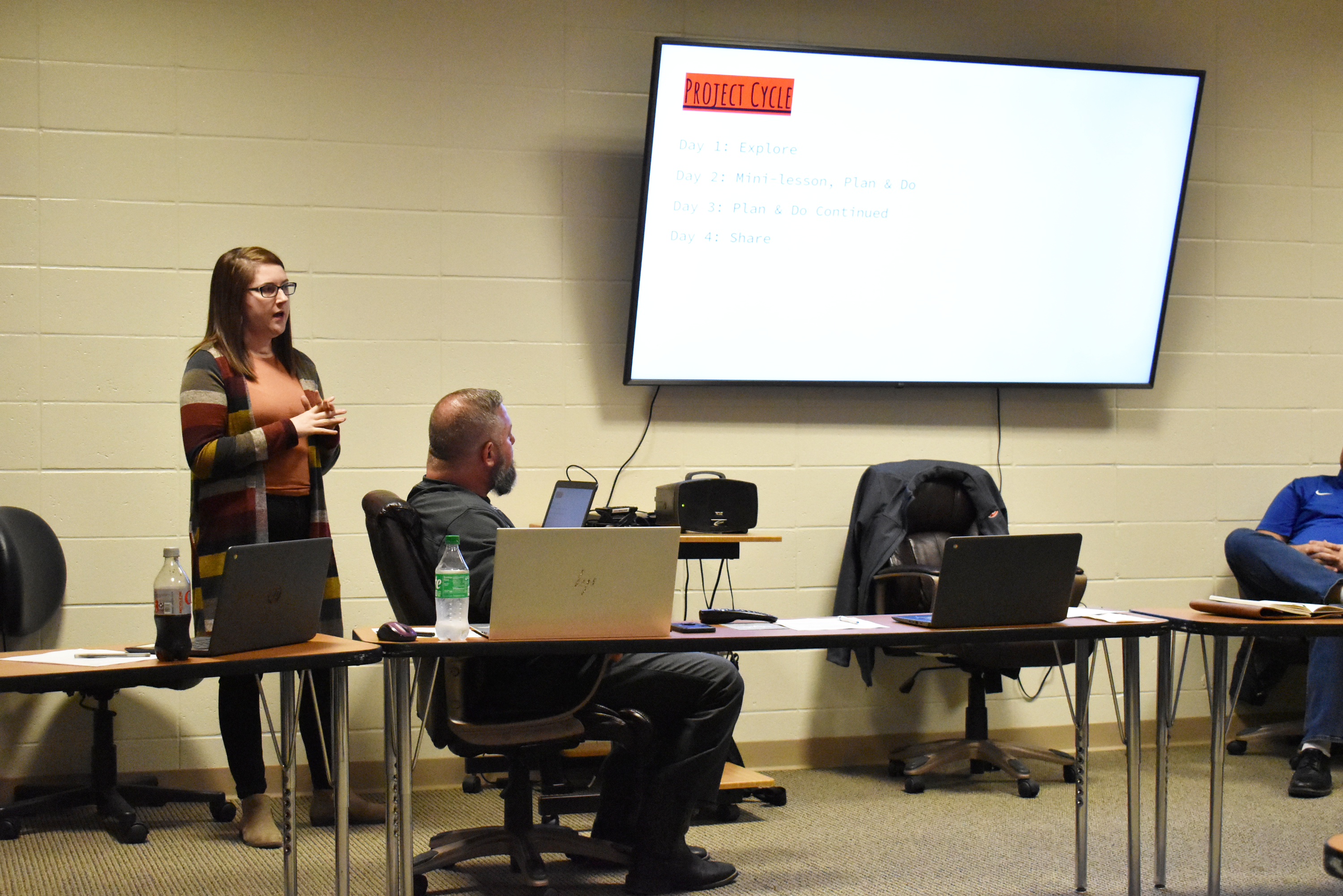 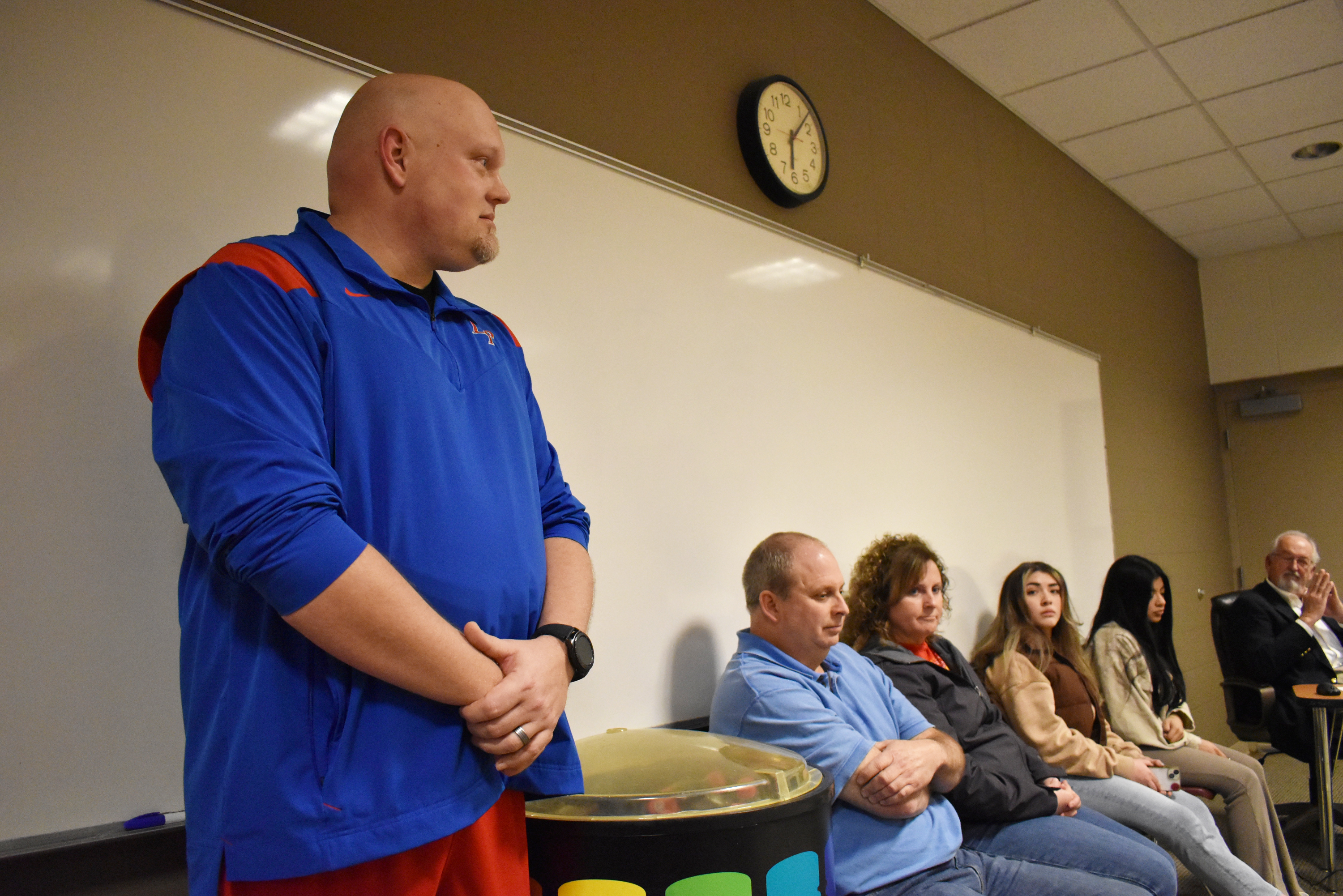 Democrat photo/Garrett Fuller — California Lady Pintos basketball coach Bobby Sangster, left, listens as the California R-I Board of Education recognizes his 300th-win with the Lady Pintos on Jan. 18 at its monthly meeting at California High School. 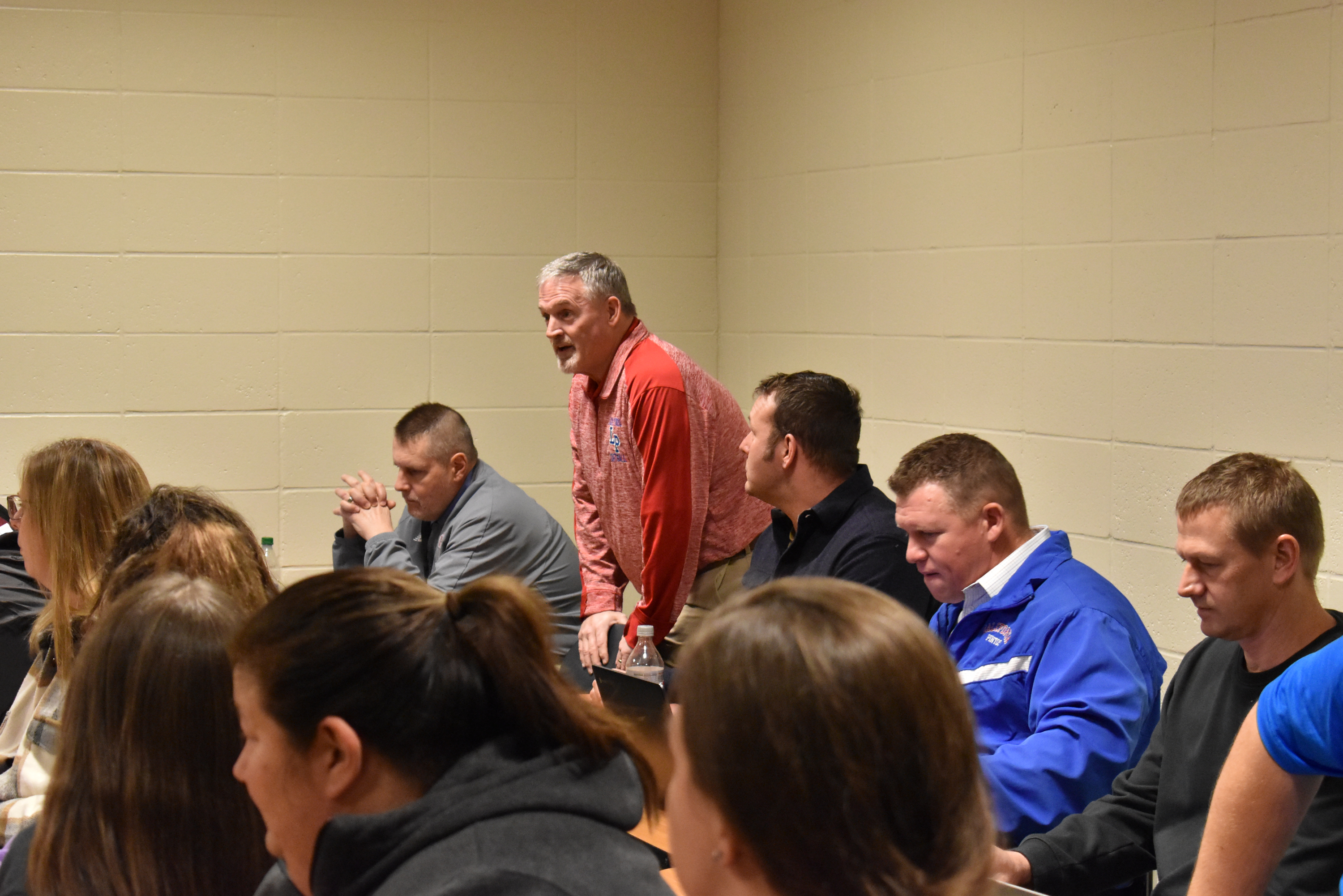 Democrat photo/Garrett Fuller — California Lady Pintos softball coach Steven Stock, standing, addresses the California R-I Board of Education on Jan. 18 at its monthly meeting at California High School as they commend him for being inducted into the Missouri High School Fastpitch Coaches Association Hall of Fame. 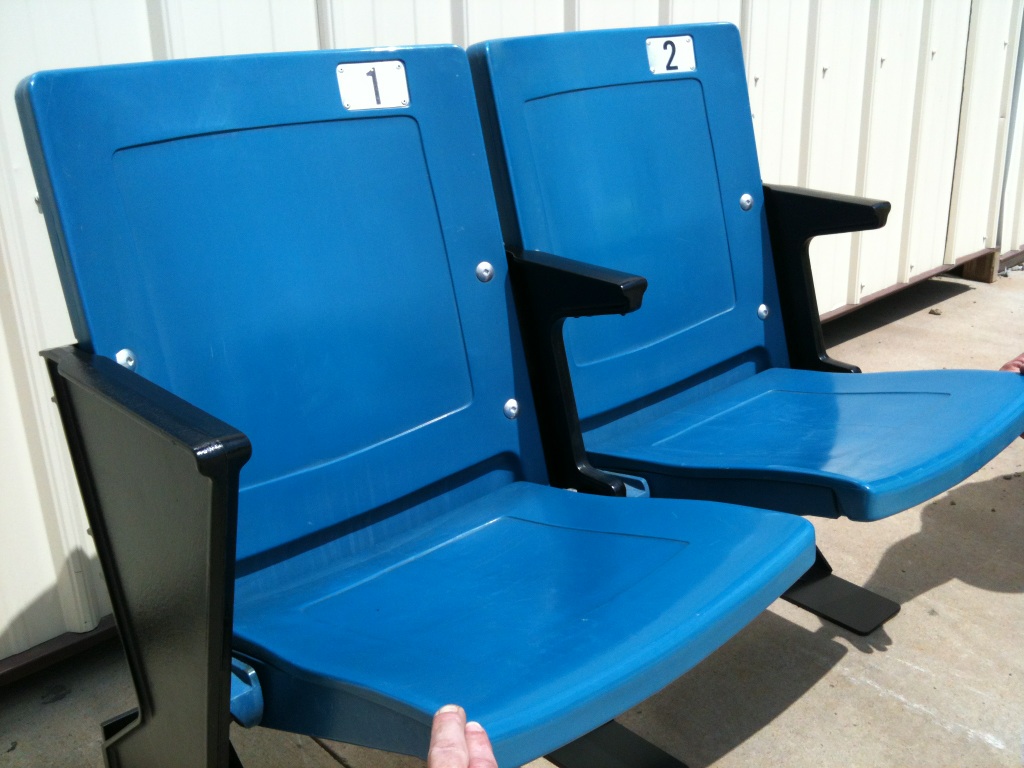 Submitted — A sample of the new seats the booster club hopes to install at California High School's baseball/softball facility for the families of players.

Print Headline: Future of potential soccer program up in the air