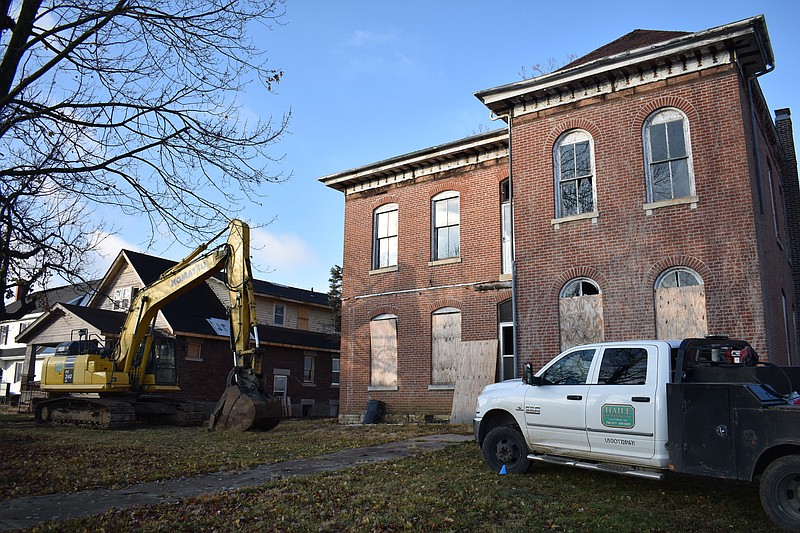 Democrat photo/Garrett Fuller — FILE — Two dilapidated houses are seen Dec. 9, 2022, at 209 S. Oak St., shortly before Gene Haile Excavating Inc., crews started leveling the homes. The Moniteau County Library intends to construct a new library on the lot, which it is currently in the process of closing on.

The possibility of building a new library facility in California is becoming more of a reality.

U.S. Department of Agriculture (USDA) Rural Development representatives discussed options for financing the construction of a new library facility Jan. 17 at the monthly Moniteau County Library Board of Trustees meeting. With USDA Rural Development's Community Facilities Direct Loan & Grant Program, the library could receive a fixed-rate, fixed-term loan with potentially better rates than local lenders to erect the facility. In addition to the loan, the trustees also discussed credit cards and budget amendments at the meeting.

While library administrators are only in the early stages of planning for a new facility, they are in the process of closing on the lot at 209 S. Oak St., where they intend to construct the new facility. The previous owner of the lot demolished two dilapidated homes on the property in December.

Travis Zimmerman, a USDA Rural Development representative, explained that a public body, such as the library, cannot take on long-term obligations. USDA Rural Development could circumvent the need for a bond issue and public approval by working with a nonprofit entity, such as the library's foundation or a new nonprofit, for the loan. The nonprofit would, in turn, lease the property to the public body. He said the nonprofit's board typically interlocks with the public body board to avoid potential conflicts. The public body would need at least 51 percent control over the nonprofit.

The loan would be a fixed-rate, fixed-term loan, Zimmerman said, with the rate locked in when the loan is approved or when the project is completed, whichever is lower. While shorter terms are available, most projects are completed using a 30- or 40-year loan. Unlike with other lenders, there would be no fees -- such as origination fees -- with the process. While the initial loan would be provided by a local lender, which the library would need to find, the USDA would refinance the project after it was completed. Zimmerman said the library would need to contact local lenders anyway to see if any could provide rates comparable to those offered by the USDA, as it is not in competition with local lenders.

The program would require the library to set aside "replacement and extension" funds to make repairs to the new building if needed.

"If you have an entity that has a big chunk that they would like to donate, and they have those funds up front, you would want to kind of look at your project costs and your loan amount and all of that," said Whitney Baragary, another USDA Rural Development representative. "Because once you lock it in, your annual payments are not going to change."

To start the process, USDA representatives said they would need to look at historical financial data for the library, creation of the nonprofit (if necessary) and the application for funding the project. From there, the USDA would look at preliminary architectural reports and environmental studies.

Baragary said the USDA typically starts working with the applicant and their architect "pretty early in the process" to establish the expectations and requirements of the project.

Moving forward, Zimmerman suggested the library start the process by creating a new nonprofit to receive the loan, enlist the assistance of an attorney to complete paperwork and assist with formation of the nonprofit, and continue discussions with architects interested in bidding on the project.

"I was thinking about when we bought (the neighboring building) ... and we were talking maybe the potential of building onto this building, and that doesn't seem like very long ago, and all of a sudden now we're, this month, we close on (the 209 S. Oak St.) property," said Mike Staton, board president. "It's kind of getting real all of a sudden, real fast."

There are no estimates for when the library might be able to break ground on the new facility, as there are many variables that can affect how quickly the loan is approved.

After an hour-long discussion on an option for financing the construction of a new facility, the board turned its attention to making final amendments to its 2022 and 2023 budgets.

Director Connie Beauchamp said the library owed an unexpected $85 for a technical support fee to its website design firm after someone used the library website's IP address, a numeric identifier for the website's location on the internet, for a separate entity. The incident forced the library to get a new credit card.

After the technical support fee, remaining bills and December payroll, the library closed out 2022 with a balance of $280,546.10.

Several categories were amended in the library's 2022 budget to balance it. In expenses, the library increased the budget for equipment and furnishings, library materials, payroll, bank service charge, and the copier equipment lease. The structural evaluation conducted in spring 2022 was also added to the budget.

Historically, she said, the library had two $1,000 credit cards for staff to use. One card was held by Beauchamp, while a staff member had the other card. When the previous staff member responsible for the card left, the library transitioned to having a single $2,000 card for Beauchamp.

Since Beauchamp has transitioned to working part time, she felt it was appropriate to return to having two $1,000 cards -- with Jessica George, media and programming specialist, having the second card.

Beauchamp's proposal was approved by the board.

During her report to the board, Beauchamp mentioned the transition to a new business-oriented Amazon Prime account. She said the library is still able to pay invoices with a check under the new plan.

For outreach, she said 84 people participated in the Winter Checkout Challenge as of Jan. 13.

Beauchamp said statistics dropped slightly in December due to the library getting rid of TumbleBooks. Tumblebooks is a curated database of chldren's e-books, availabie by subscription to elementary schools and public libraries, according to its website. She said the books were rarely checked out, starting in January with 170 accessed and dwindling down to six in September.

"... (The TumbleBooks are) not worth the cost," Beauchamp said. "So that is a difference we're going to see in our circulation numbers."

The library printed nine new cards in December, bumping the annual statistic to 220 new cards awarded in 2022. There was a slight decline in circulation throughout 2022 due to the TumbleBooks, along with a steady decline in usage of the database. However, the library saw an increase in program attendance for both children and adults.