Pintos held back in fourth quarter by defeat to Versailles 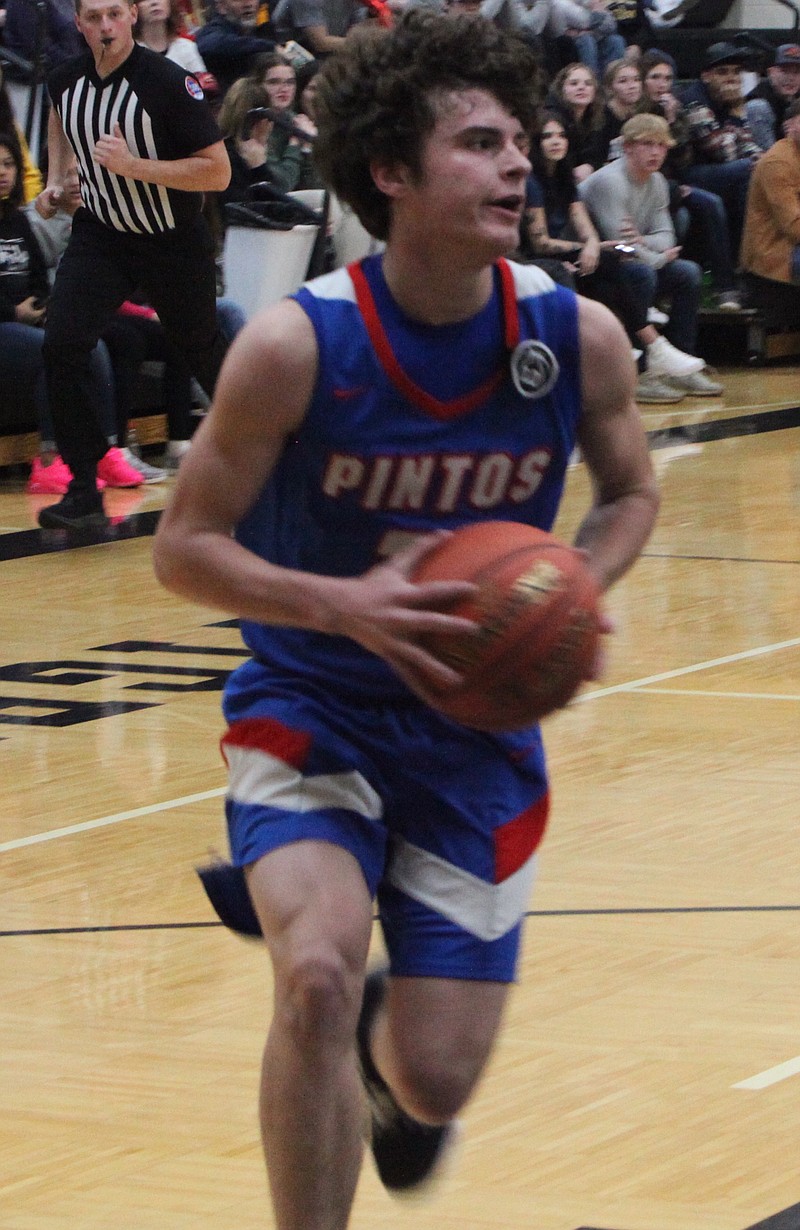 Sophomore guard Hayden Kilmer makes a steal and makes a breakaway layup for California. Kilmer had 10 points, five rebounds, and two steals for the Pintos on Friday. (Democrat photo/Evan Holmes)

It had been a bust week for California Pintos basketball going into the road game against the Versailles Tigers on Friday night. On Jan. 17, California pulled off an upset victory over Osage 55-48, but were upset by Linn on Thursday night 58-47 after Linn rallied from behind with a 24-10 run in the fourth quarter.

In their contest against Versailles, the two teams traded blows as the score went back and forth for three quarters. However, the Pintos were once again overwhelmed in the fourth quarter and the Tigers ran away with a 71-60 victory.

In the first quarter, California got off to a slow start on offense. Versailles rallied their A-game on offense by moving the ball from side to side and taking the three-point shot if it was there. Led by junior Ryder Williams, who had seven first-quarter points, Versailles jumped out to an early 13-7 lead. California started knocking down shots towards the end of the quarter and clawed back in to make the score 15-13 at the end of the first quarter.

In the second quarter, California sophomore guard Martin Kilmer got off the bench and came up with two steals for breakaway layups. Kilmer ignited the Pintos with eight second-quarter points and California tied the game at 28-28 with two minutes left in the half. The game turned in the Pintos favor when they scored the final six points of the half, giving them a 34-28 lead.

The Pintos withstood the early charge by Versailles, entering into the second half looking to extend their six-point lead. Instead, Williams exploded for 12 points in the third quarter, including two three-pointers that were a few feet beyond the line. Despite this, California still managed to take a one-point lead into the fourth quarter.

The Pintos looked for redemption in the fourth quarter after giving away a fourth-quarter lead the night before in Linn. However, the Versailles Tigers put a wrench in their plans and California went scoreless on their first six possessions. Williams and the Tigers made all the big plays on both ends of the floor to go on a 11-3 run and take an eight-point lead. Although California tried to extend the game with fouls, they never caught up and Versailles defeated California 71-60.

Pintos Head Coach Brad Conway was pleased with California's effort throughout the game and said his team played well enough to win the contest. However, the fourth quarter was once again the difference maker in the game and Conway said the Pintos will spend extra time working on late-game situations in the upcoming days.

"We had about three to four minutes in the fourth quarter where our desicion making with the ball wasn't at its best. We also missed some free throws, they got the rebound, they go down to the other end and make shots to take the lead, but I thought we played pretty well for three quarters. The same things that've hurt us in the fourth quarter hurt us again tonight," Conway said. "Maybe fatigue played into it. It was our third game in four days, but these are young guys and they still gave a good effort tonight. We've just got to clean up the things that we need to. I told the guys after the game that this game is over with, we need to put it behind in our off days over the weekend, and our focus has got to be for our next game on Wednesday."

That game on Wednesday will be against the New Haven Shamrocks at the Hermann Tournament. Tip-off is at 4:30 p.m. 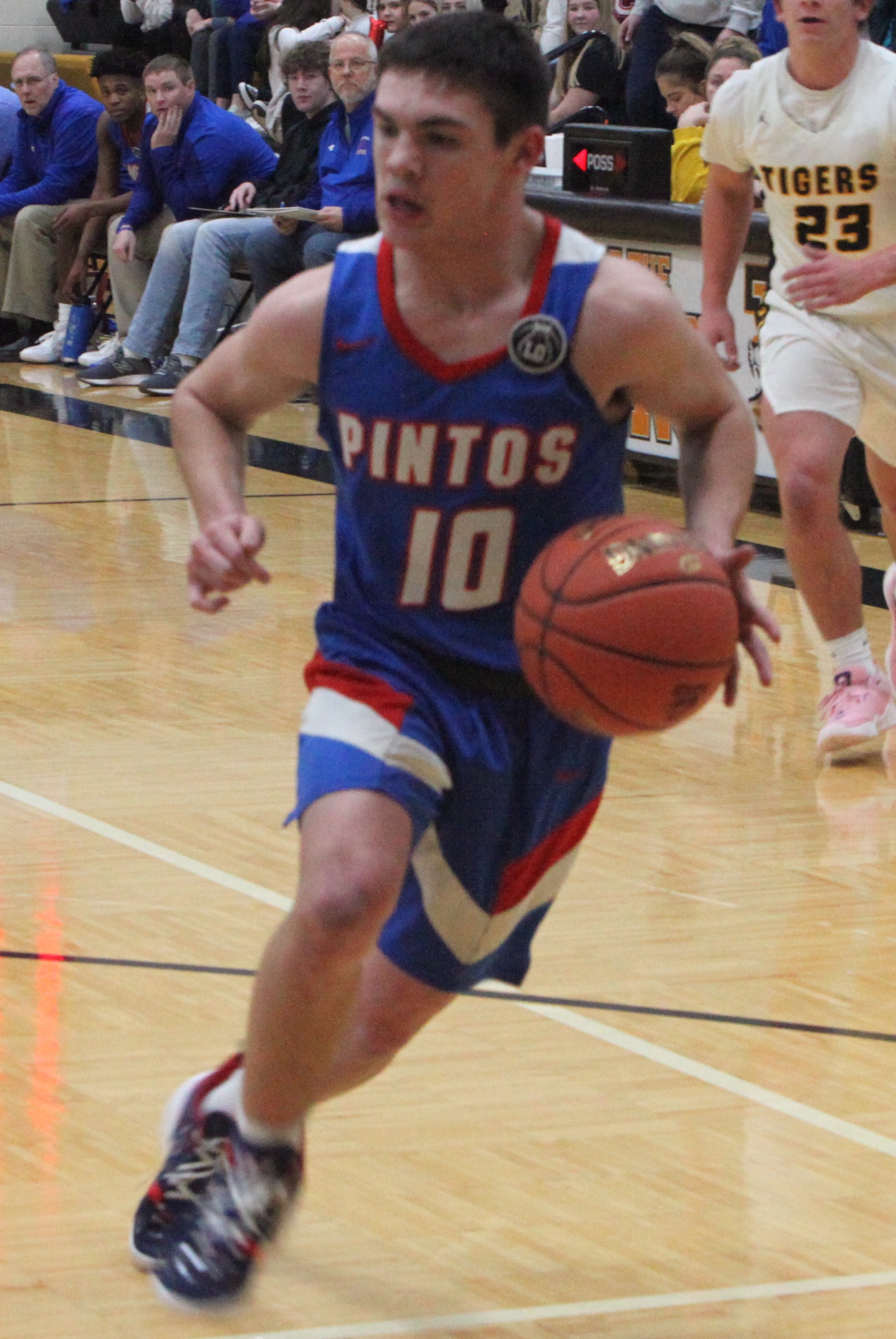 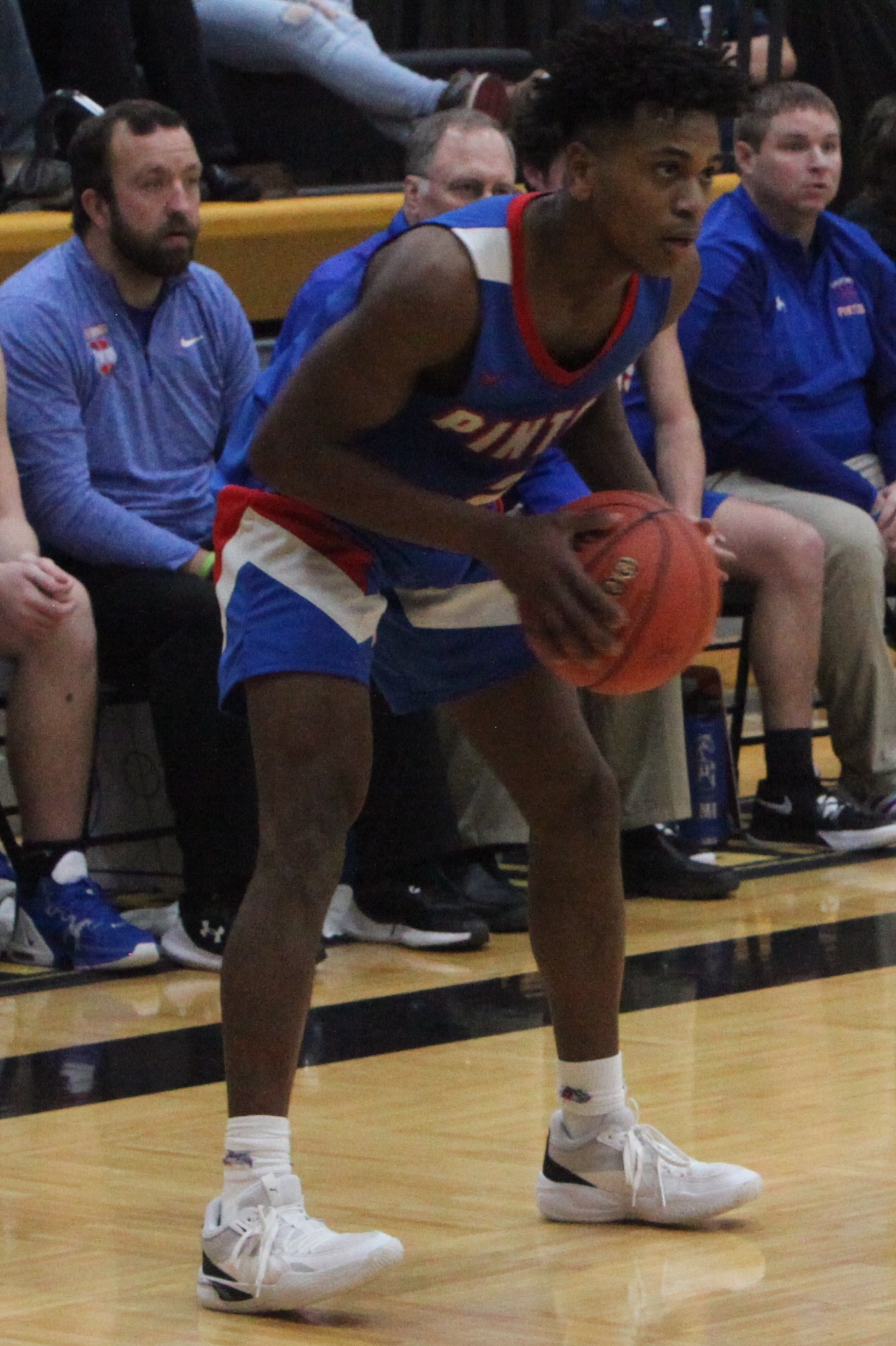 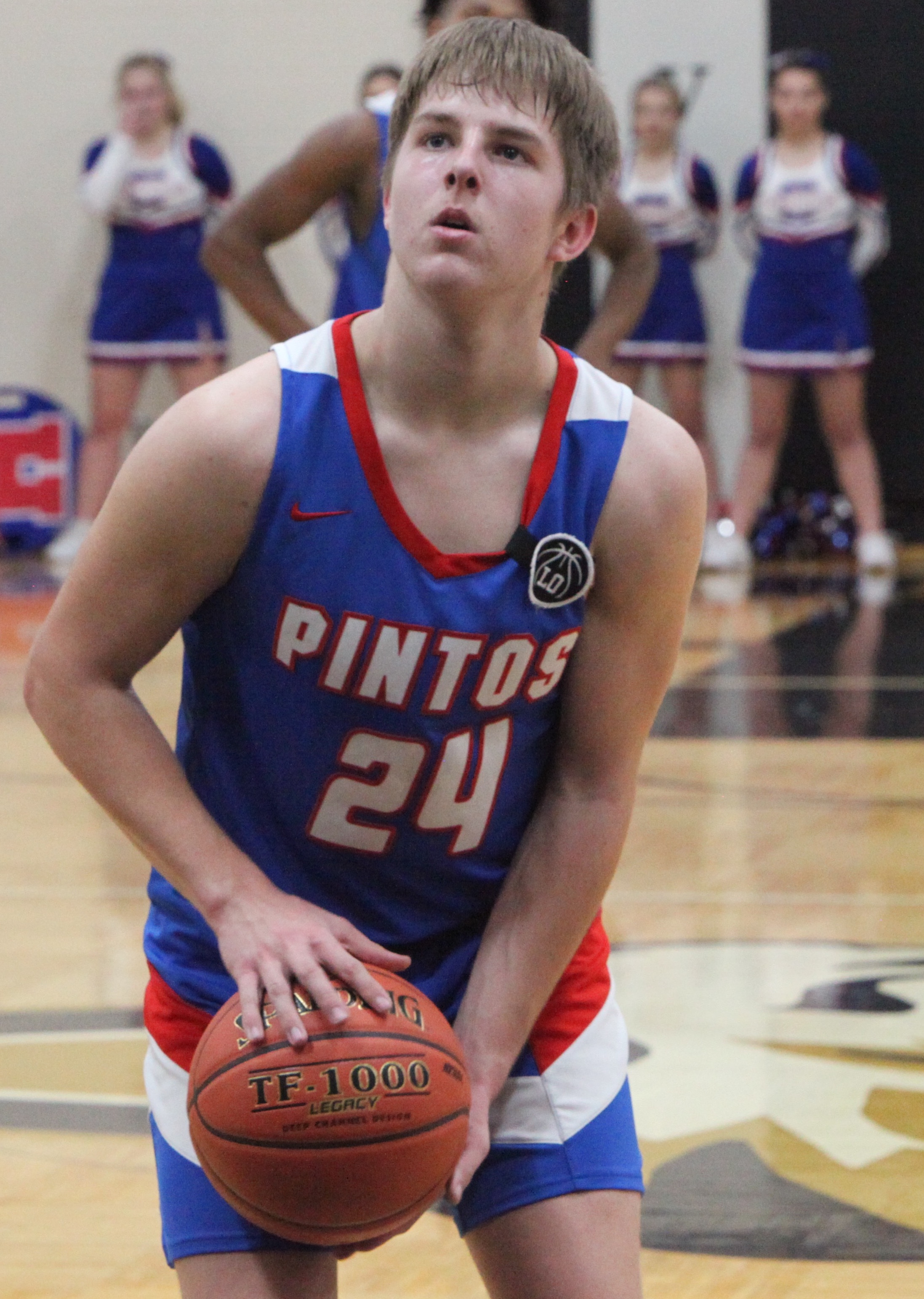 Junior guard Gavin Porter made 4-6 from the foul line against the Versailles Tigers. Porter finished the game with 16 points and six rebonuds. (Democrat photo/Evan Holmes) 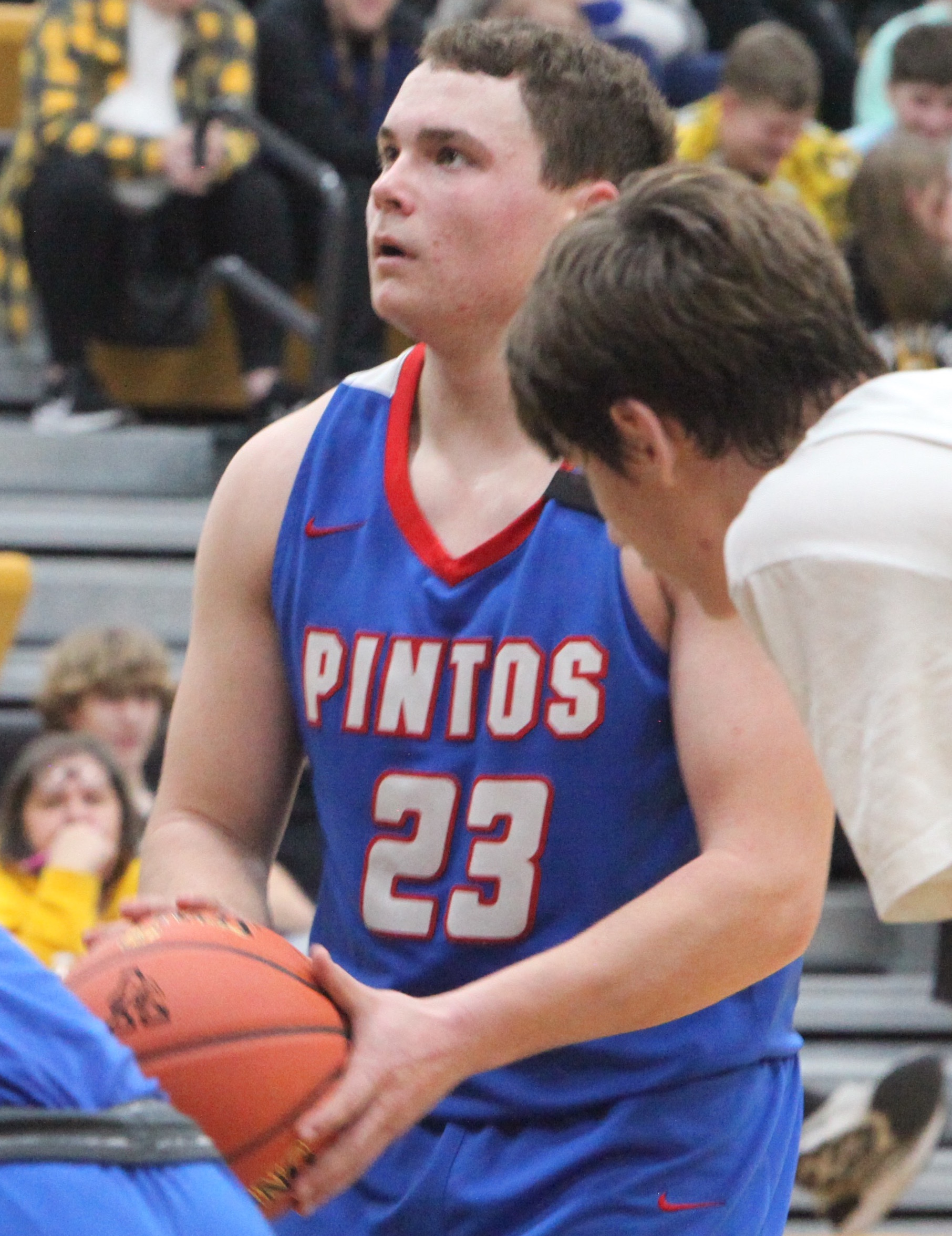 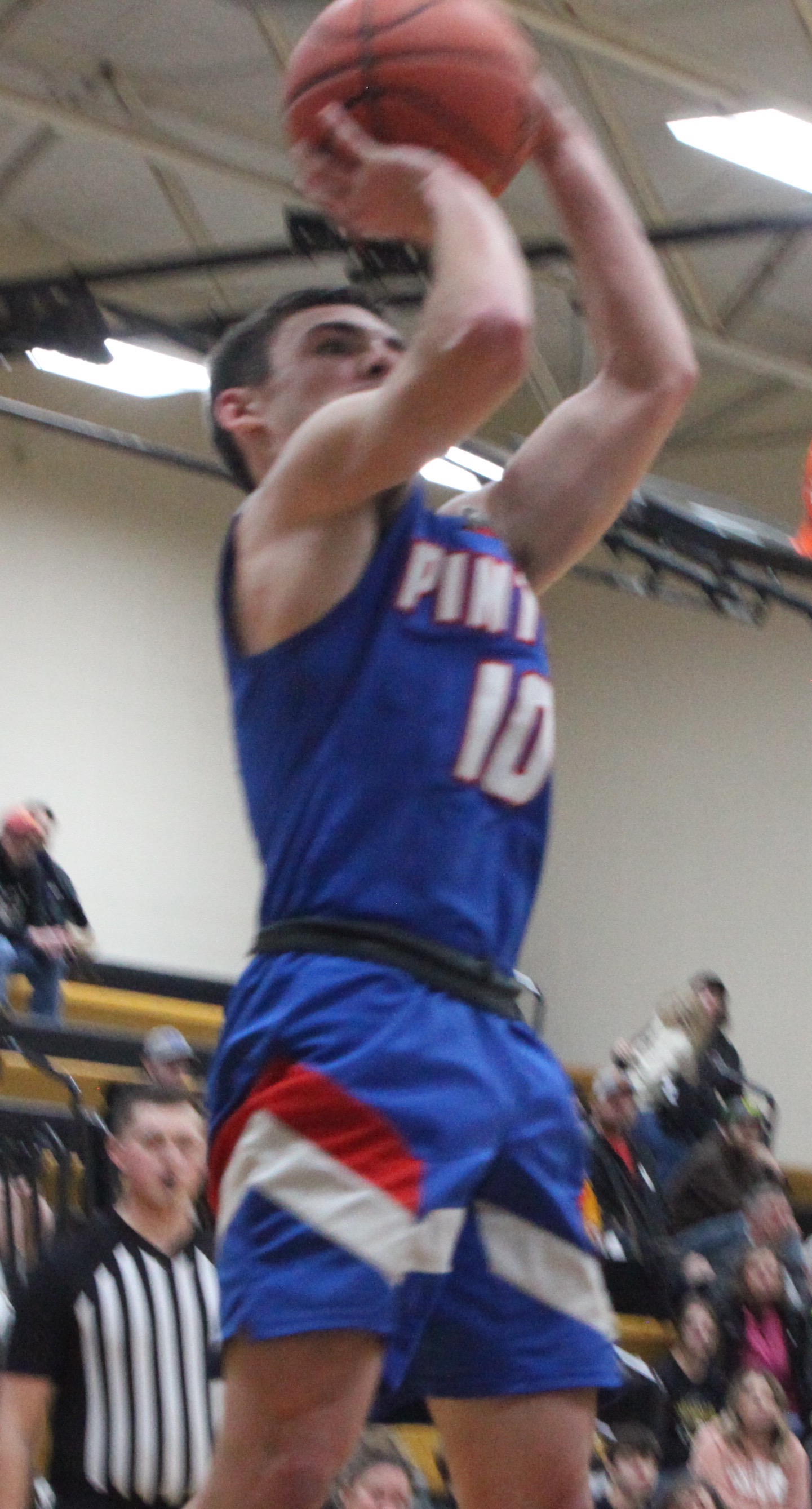 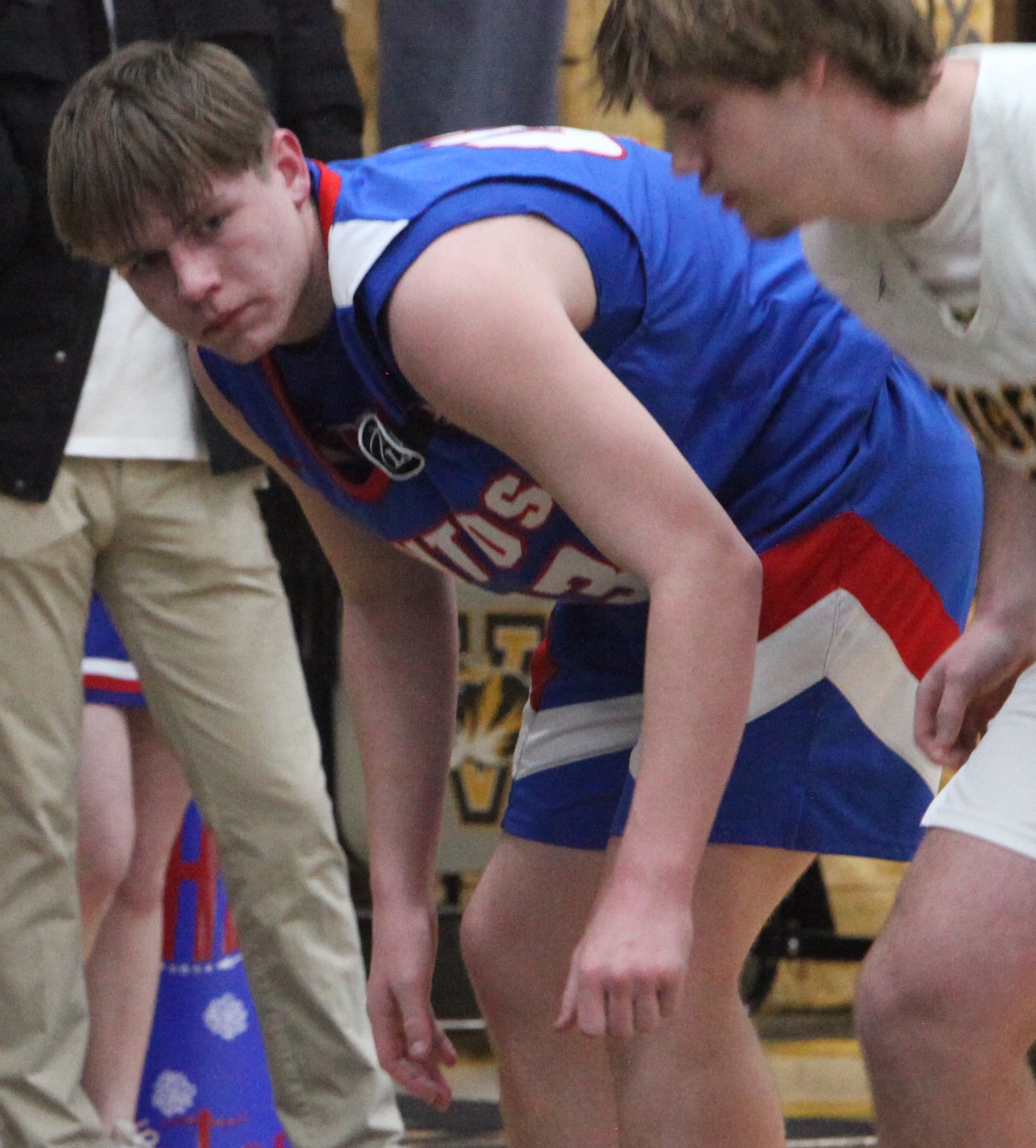 Freshman forward Landen Dunham prepares to go for a rebound off a missed free throw for California. (Democrat photo/Evan Holmes)

Print Headline: Pintos held back in fourth quarter by defeat to Versailles