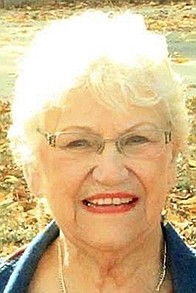 Billye Sue Murphy Jasper, 90, of Centertown, Mo., passed away on Tuesday, January 17, 2023 at Villa Marie Care Center in Jefferson City.
She was born in Centertown, Mo. on July 6, 1932, the daughter of Frank Wagner and Eddith (Brackett) Wagner, both of whom preceded her in death.
She was first married on August 5, 1951 to James Murphy, who preceded her in death on March 20, 2002. She later married Ray Jasper on April 10, 2005, who also preceded her in death on September 24, 2010.
Sue retired after many years working for the Missouri Division of Vocational Rehabilitation. She was a lifetime member of the Centertown Baptist Church. Sue enjoyed traveling, gardening, camping and being with her family and friends. She was a member of the last graduating class from Centertown High School.
Sue is survived by two sons: Michael Murphy (Julie) of Galena, Mo. and Patrick Murphy (Penny) of Jefferson City, Mo.; step-son: Danny Jasper of Russellville, Mo.; sister: Linda Gordon (Ron) of Russellville, Mo.; sister in-law: Neville Wagner of Centertown, Mo.; eight grandchildren and many great-grandchildren and great-great grandchildren, as well as many treasured friends that are like family.
She was preceded in death by her brother, Larry Wagner, and step-daughter-in-law, Jan Jasper.
Services were held Saturday, January 21 at Bowlin-Cantriel Funeral Services of California, Mo., with Rev. David Scudder and Rev. John Gorham officiating. Burial was at the Centertown Cemetery.
Memorials are suggested to the Centertown Cemetery, c/o the funeral home.
Arrangements were under the direction of Bowlin-Cantriel Funeral Services of California, Mo